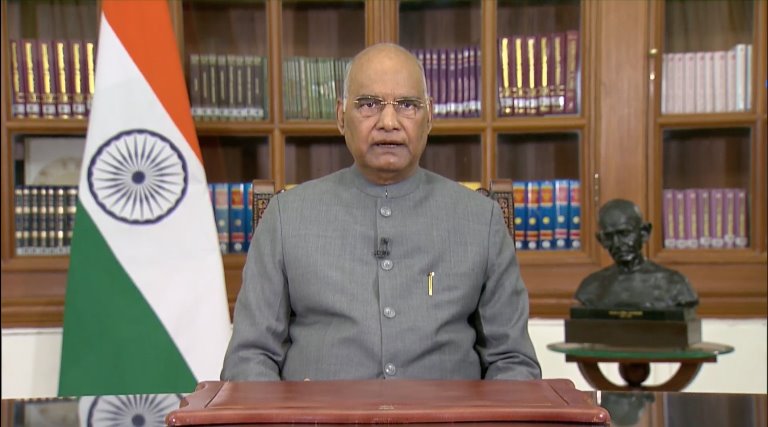 Kovind said the year 2020 was one of learning during which "mother nature taught humanity a hard lesson that the small is not expedient but complementary to the big."

Hailing PM Modi, Kovind said: "Converting a crisis into an opportunity, the Prime Minister gave a call of ‘Atma-Nirbhar Bharat Abhiyan’, or ‘Self-reliant India Mission’. Our vibrant democracy, our enterprising and talented fellow citizens, specially the youth, energise our efforts in shaping a self-reliant India."

LIVE: President Kovind's address to the nation on the eve of the 72nd #RepublicDay https://t.co/Obuf3zwRMm

The President said despite adversaries, economic reforms have continued "apace" and have been "supplemented by long-pending reforms" in the areas of labour and agriculture through legislation.

He also used his R-Day eve speech to touch upon the subject of farmers' protest over the Centre's contentious farm laws and mentioned how the legislations are beneficial for the welfare of the farmers.

"The path to reform at the initial stages may cause misapprehensions. However, it is beyond doubt that the Government remains singularly devoted to farmers’ welfare," he said.

He also praised the Centre for its 'reforms' in the education sector with the ‘National Education Policy 2020'.

"The ‘National Education Policy 2020’, with its stress on tradition as well as technology, will lay the foundation of a New India which aspires to emerge as a knowledge hub on the international stage," he said.

"The net outcome of all these efforts is before us. After about a year of this unforeseen ordeal, India today stands not despondent but confident," he added.

He said a 'self-reliant India' has manufactured its own vaccine for Covid-19, and is now undertaking a mass vaccination drive, "which will be the largest exercise of its kind in history."

Kovind also referred to China's attempt of incursion across the borders calling it an "expansionist move on our borders" and credited the "valiant soldiers" for foiling the attempt.

"To achieve this objective, 20 of them had to lay down their lives. The nation shall remain grateful to those brave soldiers. Though we reiterate our commitment to peace, our defence forces – Army, Air Force and Navy – are adequately mobilised in a well-coordinated move to thwart any attempt to undermine our security."

"Our national interest will be protected at all costs. We have also ensured a widespread understanding in the international community of India’s firm and principled stand," he said.

President Kovind mentioned that India is moving forward and "taking its rightful place in the world."

" During the recent years, its arc of influence has been expanding and encompassing the larger part of the world. The manner in which India got overwhelming support of the international community for its entry as non-permanent member in the Security Council this year is indicative of that influence."

"The quality of our engagement with leaders across the world has enhanced manifold. India with its vibrant democracy has rightfully earned its respect as a responsible and trustworthy nation," he added.