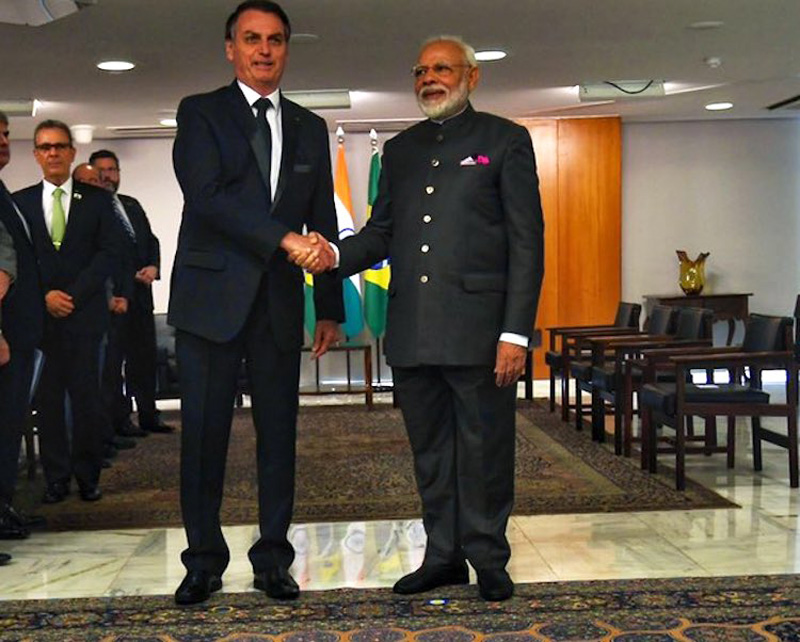 The President thanked Modi and tweeted: "Namaskar, Primeiro Ministro@narendramodi The Brazilian was honored to have a great perspective to overcome a global obstacle. Observed by our assistant as to export vacancies from India to Brazil.Dhanyavaad! धनयवाद."

The tweet also included and image of Hindu god Hanuman.

Modi made a quick reply and tweeted: "The honour is ours, President @jairbolsonaro to be a trusted partner of Brazil in fighting the Covid-19 pandemic together. We will continue to strengthen our cooperation on healthcare."

The honour is ours, President @jairbolsonaro to be a trusted partner of Brazil in fighting the Covid-19 pandemic together. We will continue to strengthen our cooperation on healthcare. https://t.co/0iHTO05PoM

Indian External Affairs Minister posted, " Trust the Pharmacy of the World. Made in India vaccines arrive in Brazil. #VaccineMaitri."

Trust the Pharmacy of the World. Made in India vaccines arrive in Brazil. #VaccineMaitri pic.twitter.com/5bt602LFXZ

India's vaccine diplomacy seems to be shining as the country is giving millions of doses of COVID-19 vaccine to South Asian nations for the past few days, promising to help its neighbours, among others, at a time when the disease continues to grip the region. Now it is spreading beyond the regional boundaries as well.

MEA spokesperson Anurag Srivastava on Friday said: "Keeping in view the domestic requirements of the phased rollout, India will continue to supply COVID-19 vaccines to partner countries over the coming weeks and months in a phased manner. It will ensure that domestic manufacturers will have adequate stocks to meet domestic requirements while supplying abroad."

He said there is interest in many countries in accessing vaccines from India which is the global hub for vaccine production.

"In so far as these requests for vaccines from India, you would recall that the Prime Minister has already stated that India’s vaccine production and delivery capacity would be used for the benefit of all humanity in fighting this crisis," he said.

India's COVID-19 vaccine diplomacy shines in South Asia and beyond

Speaking on the various nations where the vaccines have been sent, he said: "Yesterday, supplies of 10 lakh doses to Nepal and 20 lakh doses to Bangladesh were undertaken. Today, consignments of 15 lakh doses for Myanmar, 1 lakh doses to Mauritius and 50,000 doses to Seychelles are being airlifted."

Srivastava said: "As stated earlier, supplies as grant assistance to Sri Lanka and Afghanistan will be undertaken after receiving confirmation of regulatory clearances from these two countries. Contractual supplies are also being undertaken to Saudi Arabia, South Africa, Brazil, Morocco, Bangladesh and Myanmar."

He said the vaccines are sent to the foreign nations both as gifts as well as on a commercial basis.

In Hinduism, the word Sanjeevani can refer to a plant or to a mantra (a chant) or to a system/method.

The description below describes Sanjeevani as a magical herb or plant. There is also a Sanjeevani chant in Hinduism which is believed to be able to bring a dead person back to life.

As per Hinduism, Sanjeevani is a magical herb which has the power to cure serious nervous system problems. It was believed that medicines prepared from this herb could revive in any situations where death is almost certain.

The herb is mentioned in the Ramayana when Ravana's son Indrajit (Meghnad) hurls a powerful weapon at Lakshmana. Lakshmana is badly wounded and is nearly killed by Indrajita.

Hanuman was called upon to fetch this herb from the mount Dronagiri (Mahodaya) or Gandhamardhan hills, far to the north of the Vindhyas on the slopes of the Himalayas.

The mountain of herbs is identified as the Valley of Flowers near Badri in Uttarakhand on the slopes of the Himalayas.

It is sometimes called Gandhamardan, and at other times Dronagiri. Upon reaching Dronagiri Parvata or Gandhamardan, Hanuman could not identify the herb and lifted the whole mountain and brought it to the battlefield.