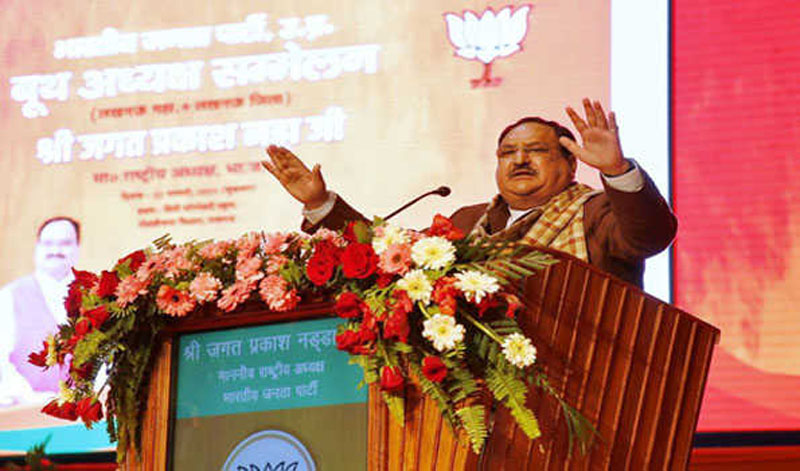 Lucknow/UNI: Describing party workers as real warriors, BJP national president Jagat Prakash Nadda said the party is set to write the history because only political outfit which has internal democracy where workers, not family members, hold the key to success.

“The enthusiasm and perseverance of the BJP workers give a clear indication about the future story of Uttar Pradesh. Out of more than 1,500 small and big political parties in the country, the BJP is the only party which has internal democracy,” he said while addressing booth level workers here on Friday.

He said this is BJP where Narendra Modi, who is born in a very poor family, can become the Prime Minister of the country.

"This is the BJP where people from ordinary families become the Home Minister and Defense Minister of the country," he said.

He said that the Congress and the Left parties used to "make fun of us at our inception stage" because at that time there was no possibility of BJP coming to power.

"We continued to fight for the cause because we believed that ideology can bring change in the country. “The Congress and the left used to talk of revolution while I used to talk about evolution because the strength of our organization as our workers is invaluable,” he said.

The BJP national president said that the principle of integral humanism, Antyodaya and cultural nationalism propounded by Pandit Deendayal Upadhyay has been carried forward by the BJP government under the leadership of Atal Bihari Vajpayee and Narendra Modi.

“With the principle of this Antyodaya, a policy of 'Sabka Saath, Sabka Vikas and Sabka Biswas' was formed and based on these policies, Jan Dhan Yojana, Jeevan Dhansh Bima, Ayushman Bharat, Ujjwala Yojana, Saubhagya Yojana, Housing Scheme, Swachh Bharat Abhiyan and Poor welfare schemes like Pradhan Mantri Krishi Samman Nidhi were made,” he said.