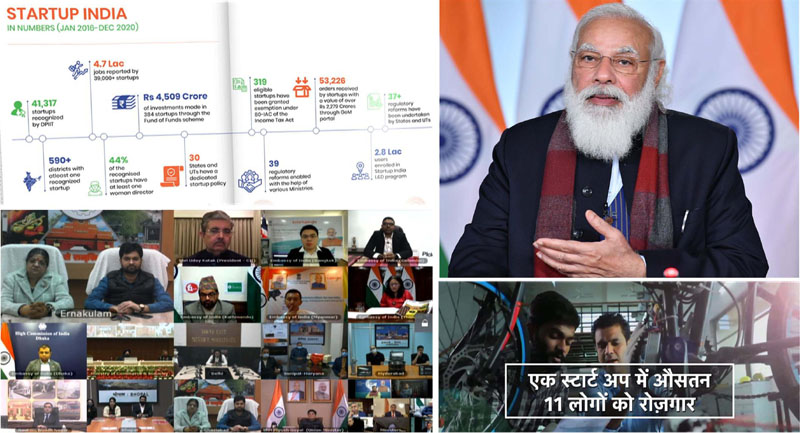 India is working for a startup ecosystem ‘Of the Youth, By the Youth, For the Youth’: PM Modi

Ministers from BIMSTEC countries and Union Ministers Prakash Javadekar, Piyush Goyal and Som Parkash were present on the occasion.

Speaking on the occasion, the Prime Minister said that the start-ups are changing the demographic characteristics of today’s business.

He pointed out that 44 per cent recognized startups have women directors and number of women working in these start up is very high.

Similarly, 45 per cent startups are in tier 2 and tier 3 cities, working as the brand ambassadors of the local products, Modi said.

Every state is supporting and incubating startups as per local possibilities and 80 percent of districts of the country are now part of the Startup India mission, he said.

"Youth from all types of background are able to realize their potential in this ecosystem. Result, the Prime Minister said, is before us as attitude has changed from ‘Why don’t you do a job? Why a start-up?’ to ‘Job is alright, but why not create your own start-up!’. In 2014 only 4 Indian startups were in the ‘unicorn club’ now, more than 30 startups have crossed the 1 billon mark," Modi added.

Noting the fact that 11 startups entered the ‘unicorn club’ in 2020 during the Corona time, the Prime Minister underlined their contribution in the Aatmnirbharta during the crisis.

They played a sterling role in meeting local needs like grocery, medicine delivery at doorstep, transportation of frontline workers and online study material, he said.

The Prime Minister appreciated the startup spirit of finding opportunity in adversity.

He said that this day is a witness to the capabilities of our youth, scientists and entrepreneurs and hard work and dedication of our doctors, nurses and health sector personnel.

The Prime Minister noted that this century is a century of  digital revolution and new age innovations.

This is also the century of Asia. Therefore, it is the demand of our time that future technology and entrepreneurs should come from the region. For this, the Prime Minister stressed, that Asian counties who have will for collaboration should take responsibility and come together.

This responsibility, naturally falls on BIMSTECF countries as we work for one fifth of humanity, said the Prime Minister.

The Prime Minister also launched a booklet titled ‘Evolution of Startup India’ detailing the experiences of India’s 5 year journey in startup space. He recalled the initial challenges which were overcome to create one of the world’s biggest startup ecosystem with more than 41 thousand startups.

Out of these startups 5700 are in IT sector, 3600 in health sectors and about 1700 are active in agriculture sector,Modi said.

The Prime Minister pointed out new possibilities in food and agriculture area as people are becoming more aware about their diet. India has paid special attention to the growth of these sectors as an Agri Infra Fund has been created with a capital base of one Lakh crore.

With these new avenues, startup are collaborating with farmers and playing a significant role in taking products from farm to table with better ease and quality.

The Prime Minister said that the biggest USP of the startup world is its disruption and diversification capacity. Disruption, as they are giving rise to new approaches, new technology and new ways; diversification because they are coming up with diverse ideas bringing revolution is diverse sectors with unprecedented scale and substance.

The greatest feature of this ecosystem is that it is guided more by passion than pragmatism.

This ‘can-do’ spirit is evident in the way India is working today, said Modi.

The Prime Minister gave example of BHIM UPI which has revolutionized the payment system as only in December 2020, 4 lakh crore worth of transections took place through UPI in India.

Similarly, India is leading in solar and AI sector.

Modi also mentioned direct benefit transfer system which providing assistance to poor, farmers and student directly in their accounts, relieving them of their difficulties and plugging the leakage worth 1.75 lakh crore.

The Prime Minister said that through the government procurement portal GeM, startups are getting new opportunities as 8 thousand startups are registered on GeM portal and they have done the business of 2300 crore through GeM.

He said that in coming time startup presence on GeM will only increase. This will lead to promotion of local manufacturing, local employment and better investment in startup research and innovation.

The Prime Minister also announced launching of Startup India seed fund with one thousand crore rupees so that there is no shortage of seed money for startups.

This will help in starting and growing new startups. Fund of funds scheme is already helping startups raising  equity capital. The Government will also help the startups in raising capital through guarantees.

"India is working for a startup ecosystem based on the mantra ‘Of the Youth, By the Youth, For the Youth’, We have to fix our goals for the next five years and these goals should be that our startups, our unicorns should emerge as global giants and lead in the futuristic technologies," Modi concluded.