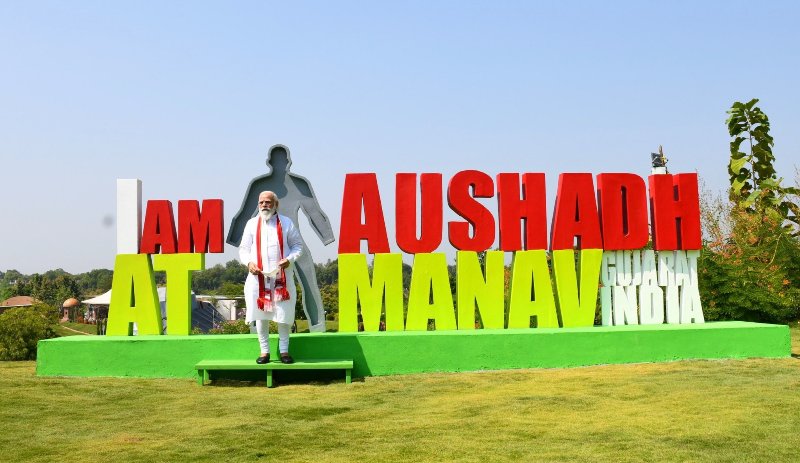 The Arogya Van has 5 lakh plants of 380 different species spread over an area of 17 acre.

Arogya Kutir has a traditional treatment facility named Santhigiri wellness centre which will provide healthcare based on Ayurveda, Siddha, Yoga and Panchakarma.

Glad to see Kevadia emerge as a vibrant place for tourism. During my visit today, inaugurated the Aarogya Van, which contains exhibits relating to nature. Aarogya Van also showcases traditional forms of healing, be it Yoga and Ayurveda. pic.twitter.com/AqMyKUIk80

The Ekta Mall displays a diverse range of handicrafts and traditional items from all over India symbolizing unity in diversity and is spread over 35000 sq ft.

The mall consists of 20 Emporia each representing a specific state in India and is built in just 110 days.

Inaugurated the Ekta Mall in Kevadia, where India’s rich textiles and handicrafts diversity is on display. It is a fitting tribute to Sardar Patel that Kevadia, which houses the ‘Statue of Unity’ also has such a centre that will further the spirit of ‘Ek Bharat Shreshtha Bharat.' pic.twitter.com/pFepVxtTP7

The technology-driven nutrition park for children is spread over an area of 35000 sq ft. A Nutri Train runs across the park to various exciting theme-based stations namely ‘Phalshaka Griham’, ‘Payonagari’, ‘Annapoorna’, ‘Poshan Puran’, and ‘Swastha Bharatam’.

Sharing some glimpses from the Children Nutrition Park, which was inaugurated today in Kevadia. This Park seeks to harness technology in order to spread awareness on nutrition and healthcare. pic.twitter.com/xxwANqiwkl

Kevadia offers a unique Jungle Safari, which takes you through the faunal diversity of India. I had the opportunity to visit the Jungle Safari area earlier this evening. Sharing some pictures. pic.twitter.com/gcyQ0je8Xc

He dedicated to the nation 17 projects under Integrated Development of Kevadia and laid the foundation Stone for 4 new Projects.

Inaugurated various development works in Kevadia, including facilities for jetty and boating. A great view of the ‘Statue of Unity’ is among the biggest attractions of a boat ride here. pic.twitter.com/Nmqm2Oqegi

He flagged-off of the Ekta Cruise Service to the Statue of Unity.