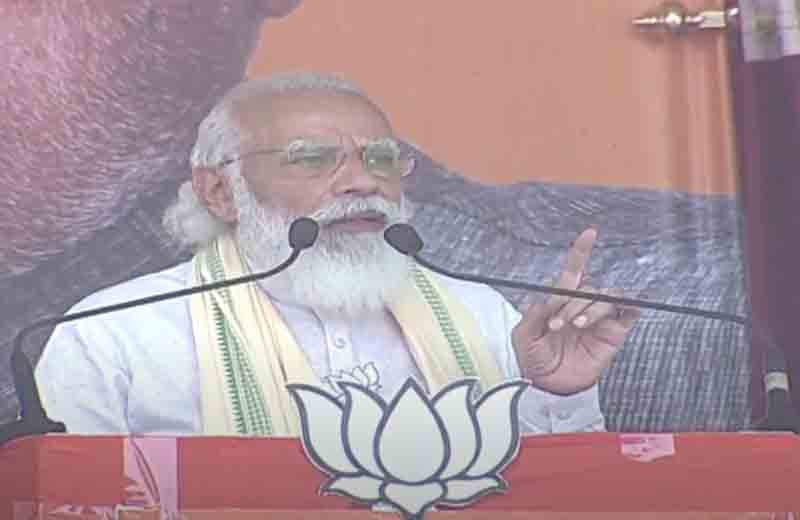 Patna/IBNS: In his first rally for the upcoming Bihar assembly elections, Prime Minister Narendra Modi on Friday trained his guns at the opposition, mostly the Rashtriya Janata Dal (RJD) and Congress, for allegedly looting the state being in power.

"These people, who had stopped all schemes for Bihar, had looted the state for 15 years," said Modi in Sasaram.

"You had given power to them but they used it as a means to loot," the PM, who was campaigning for the National Democratic Alliance (NDA), added.

Modi, who shared the dias with three-term Chief Minister Nitish Kumar, said, "People have decided not to give those who had led Bihar to a stricken state, a chance this time."

Lauding NDA's CM candidate Kumar's leadership in tackling the Novel Coronavirus situation in the state, Modi said, "If the government here had not worked swiftly then we can't imagine how many lives would have been lost due to the pandemic."

"The way the Bihar government has worked under the leadership of Nitish Kumar is evident in the results," he also said.

Courting a row, the BJP on Thursday released its poll manifesto promising free Covid-19 vaccines to people of the state besides 19 lakh government jobs.

RJD, which is feeling an absence of its imprisoned chief and veteran politician Lalu Prasad Yadav in the election battlefield, is led by Tejashwi Yadav in the polls which will be held in three phases starting from Oct 28.

As Kumar's JD(U) is fighting the polls with the Bharatiya Janata Party (BJP), its former ally Lok Janshakti Party (LJP) will go solo in the elections.