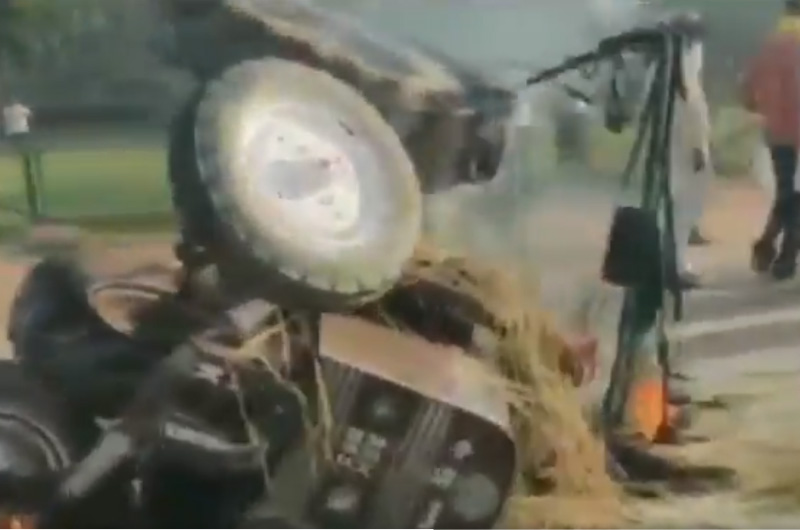 New Delhi/IBNS: Five people have been arrested for setting a tractor on fire in the heart of the national capital in protest against the controversial farm bills passed by the Indian Parliament a week ago, media reports said.

The tractor was set on fire near India Gate in Delhi allegedly by Congress workers.

Slamming the Congress, the ruling Bharatiya Janata Party (BJP) has put up a tweet, "What message the Congress is conveying to the farmers by setting a tractor on fire? Bhagat Singh had sacrificed his life for India's Independence while Congress resorted to violence to oppose the farmers' independence. It is an insult to both farmers and Bhagat Singh."

Various parts of India, a country of 36 states and union territories, are set to witness protests against the farm bills, which have now become laws with President Ram Nath Kovind's signature, on Monday.

Karnataka, the southern state which is run by the BJP, is witnessing a bandh called by farmers groups against five bills, three passed by Parliament and two by the state legislature.

The two farm bills passed by the assembly will help the buying of agricultural lands easier.

Meanwhile, Punjab Chief Minister Captain Amarinder Singh along with several other Congress workers held a protest against the farm bills, which will now allow farmers to sell their produce to institutional buyers beyond the regulated wholesale market.

I along with my colleagues from @INCPunjab held a protest against Centre's Anti-Farmer Laws at Khatkar Kalan in SBS Nagar. Most of our farmers are small & marginal who will be severely impacted by these legislations. We stand by Punjab’s farmers & will do everything to oppose it. pic.twitter.com/OEbKx7qxgf

Farmers and opposition leaders have criticised the Centre's move stating small peasants will have little bargaining power while selling their produce to institutional buyers, running the risk of getting exploited.