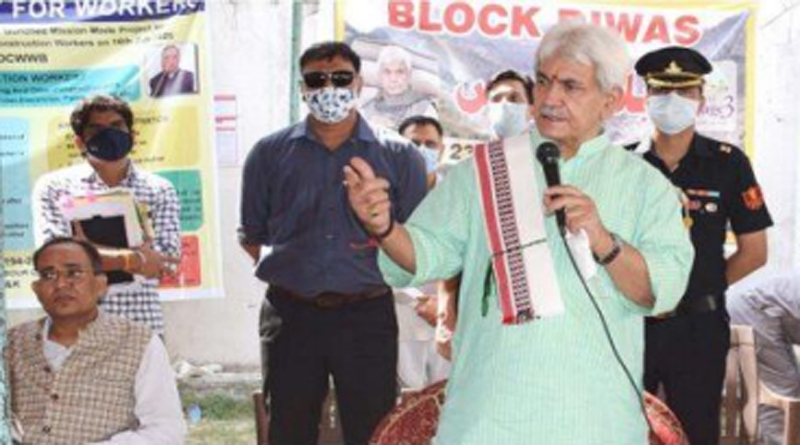 Srinagar: Jammu and Kashmir Lieutenant Governor Manoj Sinha has said the administration will ensure that basic amenities are provided across the Union Territory in the next two years.

"Basic amenities are a prerequisite for any developed and progressive society and the UT administration shall ensure that the same are provided across the UT within the next two years," Sinha said while addressing a public gathering at block Khonmoh, Srinagar.

The Lt Governor made an impromptu visit to block Khanmoh of the district in connection with the 21-days long Jan Abhiyan/ Awami Muhim, which is being held as a prelude to the flagship Back to Village-3 programme throughout Jammu & Kashmir.

During the tour, he inspected the proceedings of the administration’s efforts in providing door-step governance to the public, an official handout said.

He also interacted with the locals availing benefits of the program as well as the field staff of departments, enquiring about the progress on beneficiary oriented schemes in the block and the steps being taken for reaching out to the deserving and needy people by ensuring universal coverage of beneficiaries under various Social Assistance and Welfare schemes.

Deputy Commissioner Srinagar briefed the Lt Governor about the coverage of beneficiaries under various schemes in the block, road development works, interventions in the education & health sector, and about public demands related to water supply and sports.

Interacting with the public, the Lt Governor underscored the commitment of the government for ensuring participatory planning and empowering the people by providing opportunities for the articulation of their demands and issues.

He assured the people that all their issues shall be considered and addressed on merit.

"Government officials have been directed to attend weekly programme to help the PRIs and the local public for formulation of plans, working out solutions for local issues, judicious use of financial resources for best possible outcomes on the developmental and socio-economic landscape," he remarked.

The Lt Governor observed that under the Jan Abhiyan/Awami Muhim, Deputy Commissioners and Superintendents of Police shall conduct weekly public hearings in their offices every day except Wednesdays and Sundays, 10.30 am to 11.30 am, and advised thepublic to project their issues and demands.

Deputy Commissioners and Superintendents of Police and senior district officers shall personally visit each sub-divisional headquarters every Wednesday during the Jan Abhiyan/Awami Muhim period and hear public grievances.

He further stressed upon them to address public grievances religiously and visit all subdivisions on a rotational basis for a larger reach of the Jan Abhiyan. "Once the system is established thoroughly, the initiative shall be extended up to the block/tehsil headquarter level," announced the Lt Governor.

Later, responding to the public demands the Lt Governor stated that his vision for development is based on realistic planning backed by financial and technical aspects; and he encourages actual developmental initiatives instead of mere announcements.

He directed Deputy Commissioner, Srinagar to submit proposals on demands projected by the locals including up-gradation of hospital and schools, sports grounds, water supply schemes, road development, and other demands.

He further asked the Deputy Commissioner for clearing the bottlenecks and expedite the process for the establishment of Degree College.

The Lt Governor reiterated that all panchayats of the UT are free to utilize funds under 14 FC,MGNREGA, and the additional amount of Rs 10 lakh according to the needs and demands ofthe local population.

He stressed on cleanliness and hygiene in villages and directed fordovetailing of funds under 14th FC, MGNREGA, and B2V for local interventions in both creation of infrastructure and working out labour component for manpower to ensure this.

Addressing the youth, the Lt Governor announced that a number of initiatives have been launched and many others are in pipeline for their overall development.

He announced that an online career counseling platform has been launched on a pilot basis in district Ganderbal and Udhampur for students, which aims to provide career education guidance to the students at an early stage of their studies to choose appropriate academic and career options.

The two centers are being built at Government Polytechnic College,Jammu and Government Polytechnic College, Baramulla and shall be established at a cost of approximately Rs 360 crores, which are aimed at bringing qualitative improvements in the field of technical education and to create a learning environment for training manpower tocater to the industry requirements in J&K and outside.

"The District Development Plan shall be based on the ground assessment made with feedbackof the local populace and the officers of the administration would act as facilitators in the overall developmental processes," assured the Lt Governor.

The Lt Governor stressed that people should not face any difficulty in accessing the servicesof the government.

The Lt Governor also called for saturation of individual beneficiaries of all Centrally Sponsored Social Assistance and Welfare schemes on a mission mode.

Later, the Lt Governor also handed over various certificates and sanction letters tobeneficiaries under different departmental schemes as a token of service delivery to be ensured by the Government in such camps regularly.