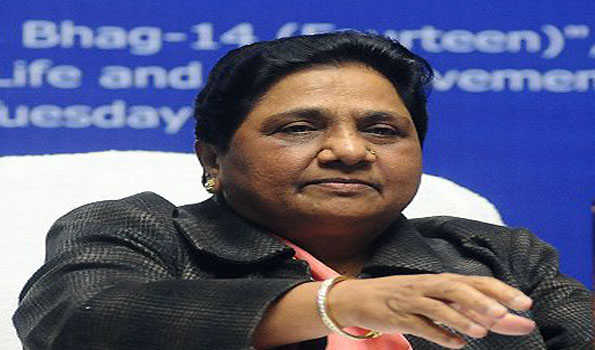 Mayawati's BSP joins race to woo Brahmins in UP

Lucknow/UNI: The Bahujan Samaj Party (BSP) on Sunday followed the footsteps of Samajwadi Party and Congress, trying to allure the Brahmins.

BSP chief Mayawati said that if her party was voted to power in 2022 Assembly Polls in Uttar Pradesh, then her government will create hospitals with modern facilities in the name of great saints, including Bhagwan Parshuram.

She also alleged that both the Central and State governments have failed in handling the prevailing Novel Coronavirus crisis.

Two days back, the Samajwadi Party had announcement to install a 108-feet tall statue of Lord Parshuram in Lucknow.

"Keeping in mind the shortcomings of the state and Central governments amid the COVID-19 pandemic, if BSP comes to power, we will create hospitals with modern facilities and accommodation facilities in the name of great saints," she said in a statement here.

She further said the four-time BSP government had launched several public interest schemes in the name of great saints of all classes and also named districts after them, which were later changed by the Samajwadi Party government, due to their casteist mentality.

'This will be re-instated, after we come to power,' Mayawati added.

Earlier in an attempt to woo the Brahmin community voters, the Samajwadi Party had announced to install a 108-ft tall statue of Lord Prashuram in Lucknow.

Parashuram is considered the sixth incarnation of Lord Vishnu by devotees and is said to have killed many warriors from the Kshatriya clan with his battleaxe (parashu) for abusing their power.

On the other hand, Congress too has set up a Brahmin Chetna Samiti, led by former Union Minister Jitin Prasada, who is taking up the issues of Brahmin atrocities during the present BJP regime.