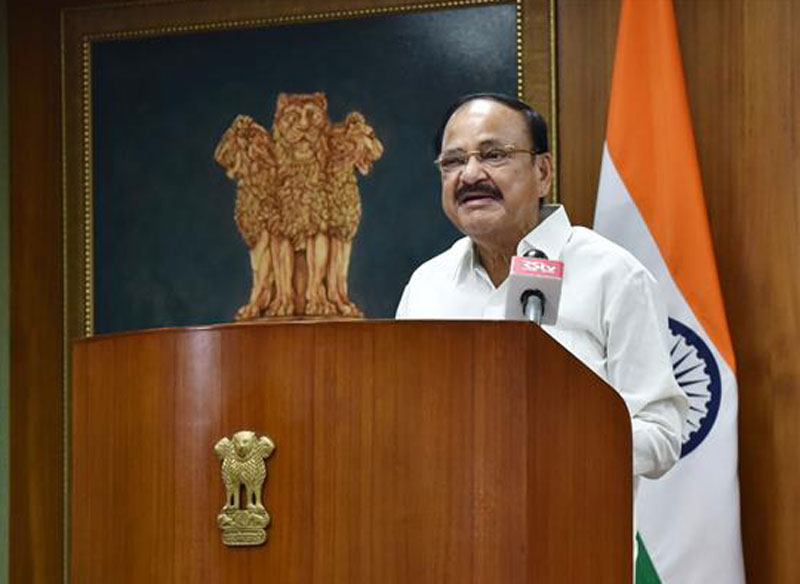 Addressing the valedictory ceremonyof a two-year training programme for IAS officers 2018 batch of at Lal Bahadur Shastri National Academy of Administration (LBSNAA) through video conference, he said the socio-economic upliftment of marginalized sections should be their main goal.

Reminding the officers that the unifier of India Sardar Vallabhbhai Patel dreamt of a civil service that would work zealously to create a new nation by fighting poverty and discrimination, the Vice President asked them to be honest, disciplined, simple, responsible, transparent and accountable.

Urging the Officer Trainees to keep learning, thinking and innovating, Naidu said “good governance is what we need today”.

He stressed that governance has to be lean but efficient with a system that is transparent and responds to people’s needs and aspirations. It has to be a system that delivers and creates conditions for growth and development.

The Vice President said that legislature may make any number of policies and laws but ultimately it is the actual implementation of those policies on ground that matters.

A government will be remembered by the delivery of the services, he underlined and said that it was the duty of civil servants to ensure that people get their entitlements without delay.

Whatever post you hold, you should create a record in good work so that people will remember you later, he told the young civil servants.

Stating that Sardar Patel’s had great faith in team work, Naidu advised the civil servants to develop teamwork by motivating their co-workers and subordinates to serve the people.

Naidu said the Prime Minister, Narendra Modi’s mantra of ‘Reform, Perform and Transform’ could be an inspiring backdrop for all their actions as they start innovating and becoming better than the best governance leaders in the world.

Observing that India is at the cusp of a significant transformation, he said that despite the current disruptive pandemic, there are a number of new opportunities for growth and self-reliant, resilient development. “You will have to take the lead in unfolding this new India”, he added.

Naidu said the new India will be based on unleashing the forces of inclusive growth, enhancing the quality of life, deepening democratic traditions and strengthening institutions of public delivery.

Advising the young officers to remember Gandhi ji’s talisman when in doubt, the Vice President told the officers that they would be able to make the right choice if they possess a dispassionate commitment to basic values of truth, fairness, justice, inclusion, public welfare and environmental protection.

Pointing out that the world was changing in unpredictable ways, he wanted them to anticipate the changes and prepare to address the emerging challenges. “Nothing is static and an administration that seeks to fulfill the aspirations of the people has to always remain dynamic,” Naidu emphasized.

The Vice President also released a book, titled “Sixty-five Conversations” containing Mann Ki Baat addresses of the Prime Minister, Shri Narendra Modi, which was brought out by the Academy.

The Director of Lal Bahadur Shastri National Academy of Administration, Sanjiv Chopra and other faculty members participated in the virtual valedictory function.

Following is the full text of the Vice President’s speech –

“I am pleased to address all of you in virtual mode at the valedictory of your two-year training programme.

I am sure the last two years have been fruitful and have given you a fairly good idea of the enormous challenges that lie ahead of you and the exciting opportunities that India of today offers to the emerging leaders like you.

You belong to a glorious lineage of civil servants who have made tremendous contribution to India’s growth and development during the last seventy-three years.

It is a civil service which has ensured that policies are well formulated and they are effectively implemented.

It is a civil service that had colonial origins but got transformed into an essentially Indian cadre addressing the administrative challenges of the  post-independence India.

I am addressing you from the Sardar Patel Conference Hall in UpaRashtrapathi Niwas and I think quite appropriately so, because you belong to what has been famously described as the ‘Steel Frame’ by the late Sardar Vallabhbhai Patel, who was instrumental in creating the All India Services.

The civil service that Sardar Patel dreamt of was an administrative set up that would work zealously to create a new nation that would fight poverty and discrimination and make India a great country.

I am told that you have a very rigorous training schedule and during these two years, you have had a good grounding in a number of subjects of Public Administration, Economics, Law, Political Science and Constitution, Management, History and Culture and Language.

In addition, you have had a unique opportunity to get a glimpse of the working of different wings of the government and the richness as well as complexity of our country’s social fabric during Bharat Darshan and the district level training programme.

What you have studied, observed, analyzed and internalized is going to be an excellent preparation for shaping a bright career.

It is a combination of your knowledge of state of the art in the domain, the agility of your skill acquisition and your deep empathetic, humane attitude that will determine how successful you are in your chosen profession.

Underlying all these traits is the quest for putting in your best effort in whatever you do. Because the people look up to you as a member of the highest rung of civil service. They expect that in your approach and performance, you set high benchmarks and are a role model. They expect nothing but excellence from you.

The world is changing rapidly in unpredictable ways. You, as administrators, have to anticipate these changes if possible and prepare to address the emerging challenges. Nothing is static and an administration that seeks to fulfill the aspirations of the people has to always remain dynamic.

I am happy to know that you have been in the forefront of the efforts of the governments to tackle the COVID pandemic. The experience you have gained would definitely stand you in good stead to handle any kind of health emergency in future.

I am also glad to know that all of you have familiarized yourselves with the ongoing initiatives in the areas of Swachh Bharat Mission, Education, Health, Law and Order and working with Panchayat Raj Institutions.

In your career, you will have to work with elected people’s representatives at various levels. You will be mingling with people from different segments of our population. In all your dealings, please maintain the attitude of mutual respect and cultivate the ability to patiently listen to and appreciate different viewpoints. This will greatly enhance your effectiveness.

Let me recall what Shri V.P. Menon, who was the Secretary to the Government of India in the Ministry of the States under the legendary Sardar Patel, during the period when 550 princely states were integrated into the Indian Union, had to say about the quality of leadership of Sardar Patel. He said,

“Leadership is of two kinds. A leader like Napoleon, who was master of both policy and detail, wanted merely the instruments to carry out his orders. Sardar's leadership was of second category. Having selected his men, he trusted them entirely to implement his policy. Sardar never assumed that he knew everything and he never adopted a policy without full and frank consultation. Whenever we entered into any discussion, we did so as personal friends rather than as Minister and Secretary.”

I would like to underscore the cordiality of their relationship. Also, please note the humility of the first Deputy Prime Minister of the country who “never assumed that he knew everything”.

It is this willingness to learn from others that you must emulate. You should not let arrogance or prejudice cloud your actions. As a good team leader, you should capitalize on the core competence of each person you are working with.

India is at the cusp of a significant transformation and, despite the current disruptive pandemic, there are a number of new opportunities for growth and self-reliant, resilient development. You will have to take the lead in unfolding this new India.

This new India will be based on deepening our democratic tradition and strengthening institutions of public delivery, on unleashing the forces of inclusive growth and enhancing the quality of life.

In the course of your career, you will have to make many choices. You will make the right choice if you have a dispassionate commitment to basic values of truth, fairness and justice, to inclusion, public welfare and environmental protection, if you have the Constitution as the compass and national and public interest as the guidepost.

When in doubt, remember Gandhi ji’s talisman and “recall the face of the poorest and the weakest man [woman] whom you may have seen” and question yourself whether the decision you plan to take will be of any use to him or her.

The Prime Minister’s mantra of Reform, Perform and Transform can be an inspiring backdrop for all your actions as you start innovating and becoming better than the best governance leaders in the world.

Good governance is what we need today. Governance that is lean but efficient, a system that responds to people’s needs and aspirations, a system that that is transparent and objective, a system that delivers and creates conditions for growth and development.

I look upon you as effective, pro-active change agents- competent, confident and committed – eager to usher in a new India we all wish to see.

You are going to be alumni of this reputed training institution named after an illustrious son of modern India, Shri Lal Bahadur Shastri. Shastri ji was a remarkable leader whose hallmarks were integrity and humility, empathy and quiet efficiency, national pride and indomitable courage. I am sure you will be able to constantly draw inspiration from this legendary leader.

I would like to urge you to treat your work or vocation as a mission. A mission to build our country with honesty, dedication and a passionate commitment to bridge the many ‘divides’ in our country, between the rich and the poor, between men and women, between the rural and the urban areas. Socio-economic upliftment of marginalized sections should be your goal.

Before concluding, I must compliment Lal Bahadur Shastri National Academy of Administration (LBSNAA) for imparting world-class training to young civil servants and enabling them to acquire the knowledge, skills and attitudes to be among the best administrative leaders in the world.