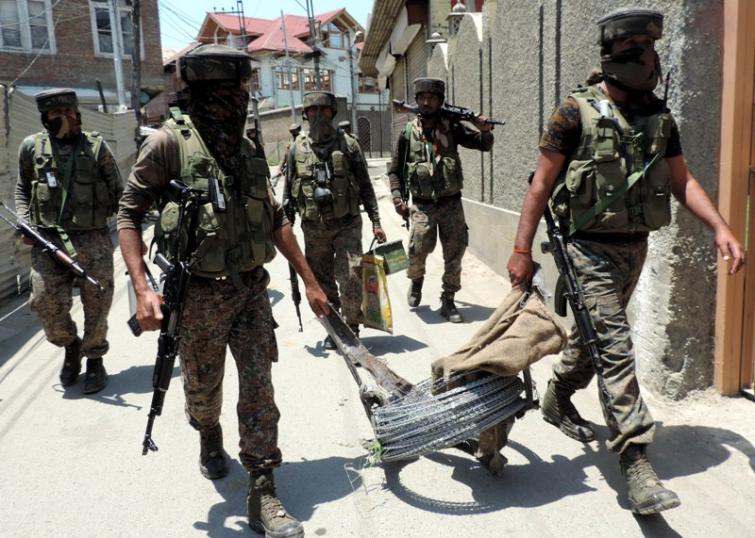 Amid faceoff with China in LAC, India's Kashmir ops kill 41 militants in June as Pakistan tries to inflame LoC

Srinagar/IBNS: At a time India was busy in tackling China's territorial aggression along the Line of Actual Control (LAC), Beijing's all-weather friend Pakistan had tried to inflame the Line of Control (LoC) in Jammu and Kashmir though New Delhi's operations in the valley killed 41 militants in June, a media report said.

There have been 382 ceasefire violations along LoC in May and 302 in June registering a sharp rise from the figures recorded in the similar months last year,  an Indian Express report said.

It is important to note that Jammu and Kashmir was a state with special status in May and June last year.

The number of ceasefire violations has sharply increased after Prime Minister Narendra Modi-led Bharatiya Janata Party (BJP) government at the Centre took a bold step on Aug 5, 2019 to abrogate Articles 370 and 35A to strip the valley of its special powers.

"On the LoC, the number of CFVs had gone up last year and has remained high since. It is unlikely that it will come down anytime soon. The Pakistan army is keen on sending militants across as its aim is to make this summer in Kashmir ‘hot’. We are responding in good measure to its actions on the LoC," an official told the daily.

In similar words, Lt General BS Raju, Chinar Corps Commander told the newspaper, "There is only one reason for the near constant ceasefire violation: Pakistan’s attempt to assist more terrorists to infiltrate into India in order to disrupt normalcy in the Kashmir valley. Pakistan Army facilitates these infiltration attempts.”

"Pakistan’s persistence in infiltrating terrorists, proliferating false propaganda are intended to disturb peace and its actions are unlikely to change anytime soon," he added.

However, India's security forces were ready to battle Pakistan's onslaught by increasing the counter-militancy operations in Jammu and Kashmir, which is now a Union Territory.

As per the official data, 119 militants were killed till June this year including 41 in the current month.

Lt General (retd) Subrata Saha, member of the National Security Advisory Board, who served as the Chinar Corps Commander, said as quoted by The Indian Express, "The security forces in Kashmir have been additionally proactive, given the tense situation on the Line of Actual Control against China, it is a good strategy to keep the terrorists on the run."

"Because of the pressure in the hinterland, the handlers in Pakistan are trying to heat up the LoC to divert attention of the Army. It is also trying to push infiltration to make up for the denuding numbers of terrorists," Lt General Saha added.

On Jun 15, at least 20 Indian soldiers were martyred in a clash, which turned out deadly for the first time in 45 years, with the Chinese troops at Galwan Valley in eastern Ladakh.

Though China didn't reveal any figure about the killing of its soldiers, unconfirmed reports said around 45 Chinese soldiers were killed in the skirmish, justifying Prime Minister Modi's words that the Indian personnel who were martyred gave befitting reply in the border till their last breath.