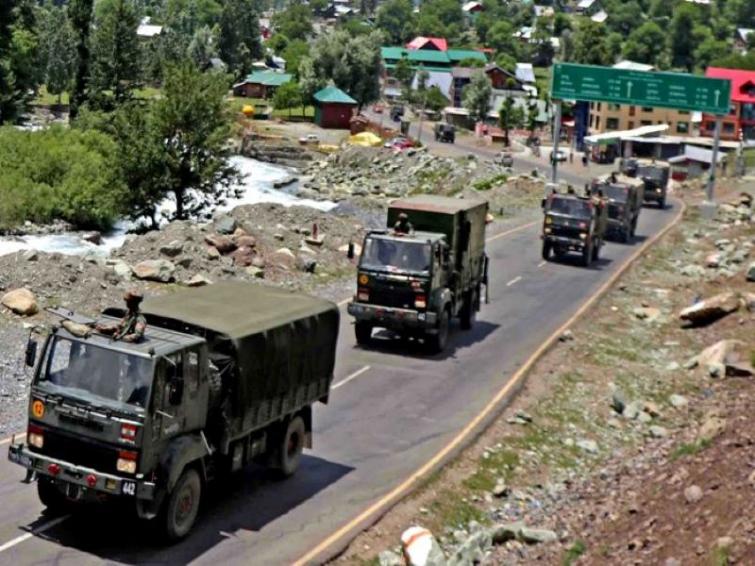 New Delhi/IBNS: India has decided to strengthen its presence at the 3,488-km LAC, the de facto border with China, in view of the troop build-up by Beijing on the other side, said a media report.

Both the army and the Indo-Tibetan Border Police (ITBP) are fortifying their posts with men and material, said an NDTV report.

After the Ladakh face-off on the intervening night of June 15 and 16, in which 20 soldiers were martyred, more ITBP troops are being sent to Ladakh, the NDTV report said quoting a a government official, adding that the decision was taken to post an entire company of the force instead of a platoon to help the army at all patrolling points.

The situation at Galwan Valley, Hot Springs and Pangong Lake continue to remain tense even after the talks between both sides on Monday, according to the reports reaching National Security Council, the NDTV report added.

India wants the status quo to be restored as on April 30, 2020. Both India and China want thinning of troops at Patrol Points 14, 15 and 17 at Galwan and Gogra, the report said, adding a decision on these points may take weeks of deliberations.

Satellite images in an NDTV report yesterday showed Chinese construction on the embankment near Patrol Point 14 in Galwan, at Patrol Point 15 large tents have been put up and the Chinese troops are camping there for almost a month, at patrolling point 17, large troop mobilisation has been done from both sides.

Meanwhile, India on Thursday once again accused China of unilaterally altering the Line of Actual Control.

"In early May, the Chinese side had taken action to hinder India's normal, traditional patrolling pattern in the Galwan Valley area. The ground commanders addressed the resulting face-off as per the provisions of the bilateral agreements and protocols," MEA spokesperson Anurag Srivastava said in the weekly media briefing on Thursday.

In mid-May, the Chinese side sought to change the status quo in other areas of the Western Sector.

"We had registered our protest on the Chinese actions through both the Diplomatic and Military channels and made it clear that any such change was unacceptable to us. Subsequently, the Senior Commanders met on 6 June 2020 and agreed on a process for de-escalation and disengagement along the LAC that involved reciprocal actions. Both sides had agreed to respect and abide by the LAC and not undertake any activity to alter the status quo," he added.

"As I mentioned in my statement on 20th June, the Chinese side departed from these understandings in respect of the LAC in the Galwan Valley area and sought to erect structures just across the LAC. When this attempt was foiled, Chinese troops took violent actions on 15 June 2020 that directly resulted in casualties," he stated.

This is not in accordance with the provisions of our various bilateral agreements, especially the key 1993 Agreement on the Maintenance of Peace and Tranquility along the Line of Actual Control in the India-China Border Areas, he said.