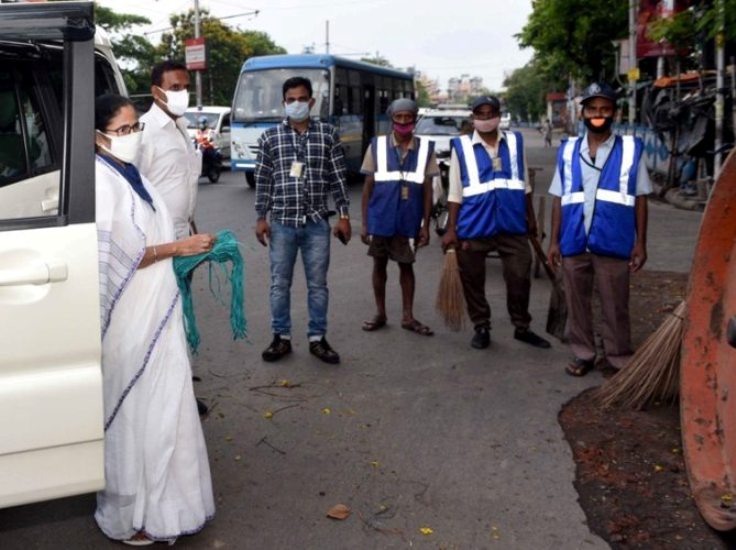 Kolkata/IBNS: West Bengal Chief Minister and Trinamool Congress supremo Mamata Banerjee has slammed the state unit of BJP for engaging in politics at a time when the state is struggling to overcome the coronavirus crisis and the destruction caused by Cyclone Amphan.

Without naming anyone, Banerjee said she never asked to remove PM (Narendra) Modi from Delhi, but some political parties were asking to "remove" her government from the state when it is fighting to save lives on two fronts, said an NDTV report.

She alleged that her critics were absent during the last three months when her Trinamool Congress government was working on the ground, and asserted that Bengal will win both against the coronavirus and the "conspiracy".

She was speaking at an event to mark World Environment Day.

Banerjee's reaction came after West Bengal BJP president Dilip Ghosh alleged that the Trinamool Congress government had given an inflated estimate of the losses in the aftermath of Cyclone Amphan.

She said the state government is facing challenges like paying the government employees and pensioners on time, and added that at least 25 lakh farmers who have suffered losses and 5 lakh families who had lost their homes have received relief.

Chief Minister Mamata Banerjee had said that the state suffered damages equivalent to Rs 1 lakh crore, which the BJP leadership of the state termed as a strategy to make money from the disasters, a practice continuing from the times of left front government.

The war of words between Mamata Banerjee led Trinamool Congress government and the BJP, which rules the Centre, have grown increasingly bitter ahead of the assembly elections in the state due next year.

While the BJP has been criticising the ruling Trinamool Congress of mishandling the coronavirus situation and now Cyclone Amphan, the Trinamool chief has hit back accusing the Centre has not released enough financial relief and interfered in its efforts.