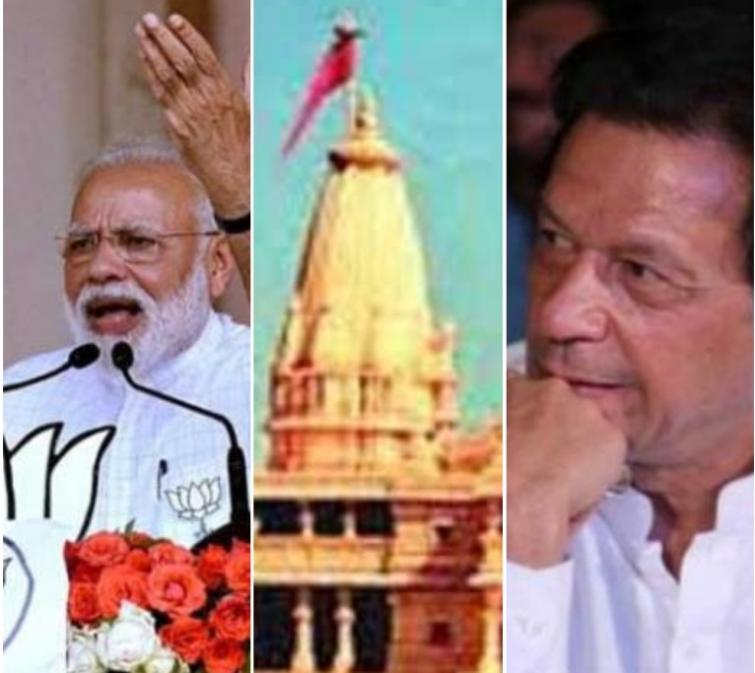 New Delhi/IBNS: India on Thursday launched a scathing attack on Pakistan after the Imran Khan government criticised the former for constructing the Ram Temple in Ayodhya amid the Coronavirus pandemic.

India said Pakistan should be embarrassed to even mention minorities.

"Given its record, Pakistan should be embarrassed to even mention minorities. After all, numbers don’t lie even if they do," he said.

India said the Imran Khan-led government should read their own country's constitution before making such comments.

"As for the judiciary, Pakistan must realize that theirs is thankfully not the norm. There are others elsewhere with credibility and integrity that Pakistan understandably finds difficult to recognise," the MEA spokesperson said.

"India is a nation served by the rule of law and which guarantees equal rights to all faiths. Pakistan’s Foreign Office may take time out and read their own constitution to realize the difference," he added.

On Wednesday, Pakistan's Foreign Office in a statement said that while the world is fighting the unprecedented situation owing to the coronavirus pandemic, "the RSS-BJP combine" is carrying on its "Hindutva agenda".

"While the world is grappling with the unprecedented COVID-19 pandemic, the RSS-BJP combine in India is busy unabashedly advancing the “Hindutva” agenda," the statement claimed.

"The commencement of construction of a Mandir at the site of the historic Babri Masjid in Ayodhya on 26 May 2020 is another step in this direction and the Government and people of Pakistan condemn it in the strongest terms," read the statement.

It said: "The developments relating to the Babri Masjid, the discriminatory Citizenship Amendment Act (CAA), initiation of the National Register of Citizens (NRC) process, and the targeted killings of Muslims in Delhi in February 2020 are vivid illustrations of how Muslims in India are being marginalized, dispossessed, demonized and subjected to senseless violence."

Criticising the mob lynching incidents, Islamabad said: The frequent mob lynchings by cow vigilantes and sinister schemes like ‘ghar wapsi’, ‘love jihad’ and ‘Corona jihad’ are part of this mindset. The right-wing “Hindutva” agenda, which appears to have permeated the state institutions as well, is moving fast towards turning India into a “Hindu Rashtra.”

As Pakistan has been sensitizing the world community, today’s India under the RSS-BJP sway is driven by the toxic mix of an extremist ideology and hegemonic ambitions, the neighbouring country said.

"The rising tide of religious bigotry in India is well-documented by international human rights organizations, regularly highlighted by the international media, and raised in a number of world Parliaments," it said.

The Pakistan government asked the international community to hold India to account for the continuous violations of human rights of minorities and urge the Indian Government to take immediate steps to ensure "that the rights of all minorities are fully protected and promoted as per India’s obligations under international instruments to which it is a party."