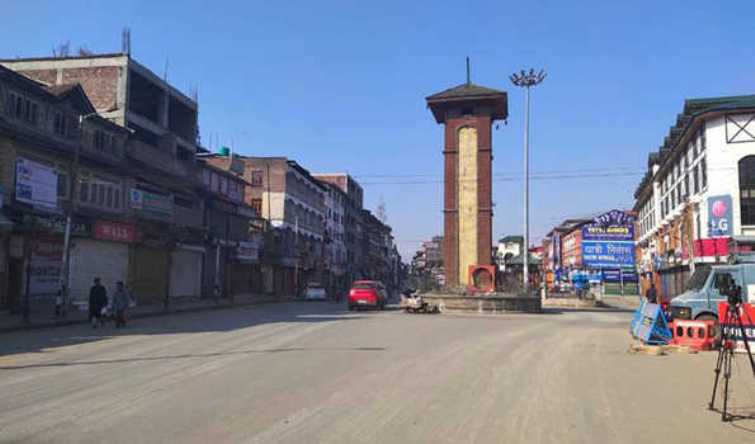 Srinagar/UNI: Curfew-like restrictions remained imposed for the third successive day on Saturday to contain the spread of coronavirus in the summer capital, Srinagar, and many other areas of Kashmir valley.

Meanwhile, shops and business establishments remained closed and traffic was off the roads in the valley, where three out of four Aligarh Muslim University PhD scholars, who had escaped from quarantine in Uttar Pradesh (UP) on March 18, were traced on Saturday. Many shops, hotels and a school have been booked for violating the government order in the valley.

Deputy Commissioner, Srinagar, Shahid Iqbal Chaudhary said strict restrictions would be imposed on Saturday on public gatherings, assembly and movement in Srinagar. 'No public movement or activity will be allowed anywhere in the district. Only government officials with valid IDs will be allowed to move,' he said.

He said concerned agencies have been directed to ensure strict enforcement of restrictions across the district. 'Strict action will be taken against violators of the order. Government officials have been asked to ensure no one is found ferried in their vehicles,' he added.

He said the order issued under Section 144 of CrPC states that the decision to impose restrictions has been taken as a preventive measure and are aimed at preventing spread of the coronavirus infection.

He said provisions of 'The Disaster Management Act 2005' have been invoked. 'Obstructions or Refusal to comply entail fine & imprisonment upto two years. Some officers and private persons put on notice today,' he said.

Urging people to cooperate, he said, 'We don't have choice when it's about human lives.'

Many roads in downtown, uptown and civil lines were sealed with barbed wires while security forces were directing people to remain indoors in these areas, asserting that curfew was imposed since early this morning.

'Security forces were making announcement through loudspeakers, directing people to remain indoors in view of curfew imposed in the district,' Shabir Ahmad, a resident of Maisuma, told UNI over the phone.

Shops and business establishments were closed and even the milkmen were not allowed to come into Srinagar from other districts.

Road connecting uptown Srinagar with civil line was blocked with barbed wire at Natipora, where ever pedestrians were also not allowed to move forward.

Meanwhile, shops and business establishments were closed in Lal Chowk, the nerve centre of Srinagar and other parts of civil lines.

Similar reports were received from other parts of the valley, particularly Kupwara and Baramulla in north, Budagm and Ganderbal in central and Anantnag, Pulwama Kulgam in south Kashmir.

An elderly woman, who had recently returned from Saudi Arabia, became the first person to be tested positive for coronavirus in Kashmir valley.

Chaudhary said it's important that people who come in contact with Coronavirus positive case(s) should immediately report to nearest health facility or our 24×7 control room.

'History of foreign travel. Arrived on 16/3/2020. Put in Isolation. Surveillance started in 300m area. Request all to cooperate. Also Immediately self report any symptoms,' Kansal wrote on twitter.