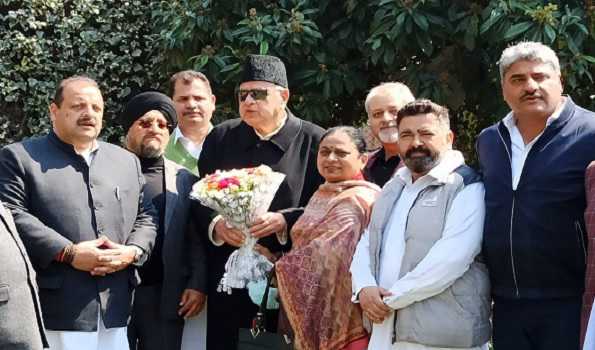 Srinagar/UNI: Jammu-based National Conference leader on Sunday met NC president and MP from Srinagar Farooq Abdullah at this residence in this summer capital.

The meeting comes two days after Dr Abdullah, a former chief minister, was released from detention under Public Safety Act (PSA) on Friday.

After meeting Dr Abdullah in Srinagar, the NC leaders sought release of all the detained political leaders for paving the way for genuine political process in Jammu and Kashmir.

Rana said restoration of democratic activities has become imperative in view of the political vaccum. “For this, a conducive political atmosphere has to be created,” he said, adding this is only possible when all the detained leaders and workers are released.

To a question, Mr Rana said the future course will be discussed by the National Conference Working Committee when all the detained leaders including Vice President Mr Omar Abdullah are released.

Jammu and Kashmir administration on Friday revoked detention of Dr Abdullah after over seven months. The revocation of detention of the former chief minister comes just two days after Public Safety Act (PSA), which was slapped on him in September last year, was extended for another three months on March 11.

“In exercise of powers conferred under Section 19(1) of the Jammu and Kashmir Public Safety Act, 1978, the government hereby revokes the detention order bearing No DMS/PSA/120/2019 issued by District Magistrate, Srinagar,” a statement issued by the newly created UT administration of J&K said.

However, the NC president was booked under Public Safety Act (PSA) on September 15, 2019 when MDMK chief Vaikoo approached the Supreme Court (SC), seeking directions to the government to allow Dr Abdullah to attend a peaceful and democratic annual conference in Chennai. The Gupkar residence of Dr Abdullah was turned into a jail for him and a large number of security force personnel were remained deployed there.