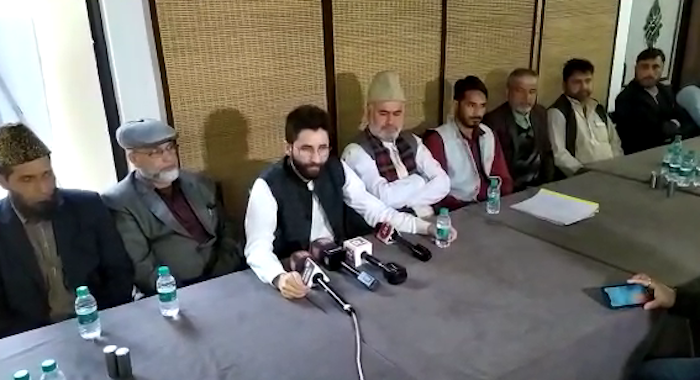 New Delhi/IBNS: While attacking the erstwhile political leadership of the Abdullahs and Muftis in Jammu and Kashmir, young  Kashmiri leader Mir Junaid has urged the Narendra Modi government to restore statehood of J&K, which was bifurcated into two Union Territories- Jammu and Kashmir and Ladakh- on Aug 5 last year along with the abrogation of Article 370.

Claiming that he has no link with Kashmiri political parties like National Conference (NC) and Peoples Democratic Party (PDP), Junaid, who is ready to fight polls leading his new political outfit Jammu and Kashmir Workers Party, said, "The Áli Baba and 40 chor’ gang from Kashmir is fooling the central government about the current situation in Kashmir. The third front, NC, PDP have no rights. They have no connection with the people. We are actually the elected people.

"We request the government to give Jammu and Kashmir a statehood as soon as possible. The NC and the PDP have no right to talk about it since they only helped in revoking Article 370 and Article 35. We will fight against them."

Junaid, who is from Handwara, held a press conference in New Delhi leading a delegation of 22 people comprising of Sarpanch, BDC chairmen, local leaders from Kashmir and said, "Although some people from Kashmir say that there are no problems in Kashmir after revocation of Article 370, many people are still facing difficulties.

"The Central Government along with the representatives/leadership/stakeholders of the union territory of Jammu and Kashmir should bring out a road map for restoring full statehood to the territory of Jammu and Kashmir within a stipulated period of time. What kind of imperatives need be satisfied as a qualification for granting full statehood to the said region, be made public encouraging public participation to achieve the required ends," he said.

On the Kashmiri Pandits, he said:" The Centre along with the representatives/leadership/stake holders of the union territory of Jammu and Kashmir should bring out a road map / realistically implementable plan for rehabilitation of the forcibly displaced Pandit community in the Kashmir Valley enabling them to live their lives with dignity without any discrimination on social, religious, economic and political planes."

"A comprehensive plan would be inclusive of socio-economic, socio-religious and socio- political aspects of a community as an ingredient of a multi-religious, multi-ethnic and multi-lingual society (the fabric of Jammu and Kashmir)," he said.

He said" "The leaders in Kashmir have so far preferred to play politics rather than helping the people. That is why the work of the Sadhna tunnel is still pending. We met Nitin Gadkari ji and PMO Minister Jitendra Singh in this regard. Gadkari ji has promised us that the DPR of the tunnel will be issued in just 15 days and construction work would begin very soon."

Several Kashmiri leaders including former Chief Ministers, Farooq Abdullah, Omar Abdullah and Mehbooba Mufti, are under detention since Aug 5 when the Modi government took the historic step of abrogating Articles 370 and 35A.

He said on one hand Pakistan plans celebrating ‘Solidarity Day’ for Kashmir, on the other hand the state of Pakistan indulges in near incessant firing across the border causing colossal loss to the life and property of those residing near the border areas like Teetwal, Tanghadar, Keran, Kupwara and Gurez area of Bandipora and various places in Baramullah district.

"Pakistan  does not care about  human lives and so they continue their indiscriminate firing; as recent as yesterday loss of lives was reported from Tanghadar area," he said on Thursday.

"While the people of Jammu and Kashmir including Ladakh have welcomed abrogation of Articles 370 and 35 A, Pakistan is bent upon disturbing peace and tranquility of the area causing severe impediments on the way to implement such development plans that will in the long and short term lead to the  prosperity of the people.

"We, the people, reject the idea of ‘Solidarity Day’ as an attempt by Pakistan to keep the area disturbed and advise it to keep off and not interfere in internal matters of India," he said.