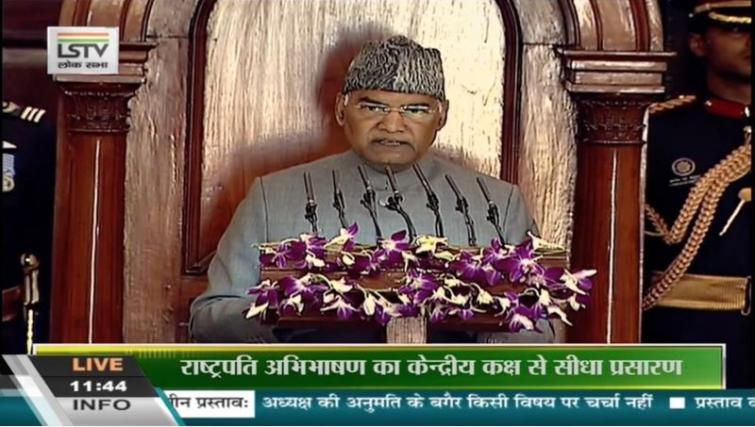 Violence in the name of protests weakens the country: President Kovind

New Delhi/IBNS/UNI: Addressing a joint session of Parliament on the first day of budget session, President Ram Nath Kovind on Friday said violence in the name of protests weakens the country in an oblique reference to several anti-Citizenship (Amendment) Act (CAA) protests which had turned violent in last one month.

"My government believes that transparent debate and exchange of views strengthen democracy further. Violence and other such acts in the name of protests weaken the country. The people of India have given my government this mandate for the formation of New India," Kovind said.

Kovind lauded the CAA saying, "I am happy that the wish of the Father of the Nation Mahatma Gandhi has been fulfilled through the enactment of the Citizenship (Amendment) Act by both houses of Parliament."

Prime Minister Narendra Modi, Union Home Minister Amit Shah and Defence Minister Rajnath Singh, who were seated among the treasury bench members, thumped the desk while there was some uproar raised by opposition members on the occasion.

The Citizenship (Amendment) Bill (CAB), which is now CAA, was passed by Parliament in the winter session of parliament in 2019.

"My government wants to make it clear that anyone reposing faith in India and is keen for citizenship can have the right," he said.

On the abrogation of Articles 370 and 35A, the President said the government has paved way for equal development of Jammu and Kashmir and Ladakh.

"The abrogation of Article 370 and Article 35A of the Constitution by Parliament is not only historic but it has also paved way for equal development of Jammu and Kashmir and Ladakh." His words drew loud thumping of desks from the treasury benches while the Opposition voiced its protest.

Pitching the 2020s as a "very significant decade for India", he underlined that the Constitution will be "the guiding light to all that we do this decade and beyond".

He said the Narendra Modi government had got the mandate to create a 'New India' which it has set out to do and pointed to the many reform measures that had helped better India's rank on several global matrices and indicators.

Kovind also praised the maturity with which the citizens of this country reacted to the Supreme Court's verdict on the Ayodhya case and maintained peace was commendable.