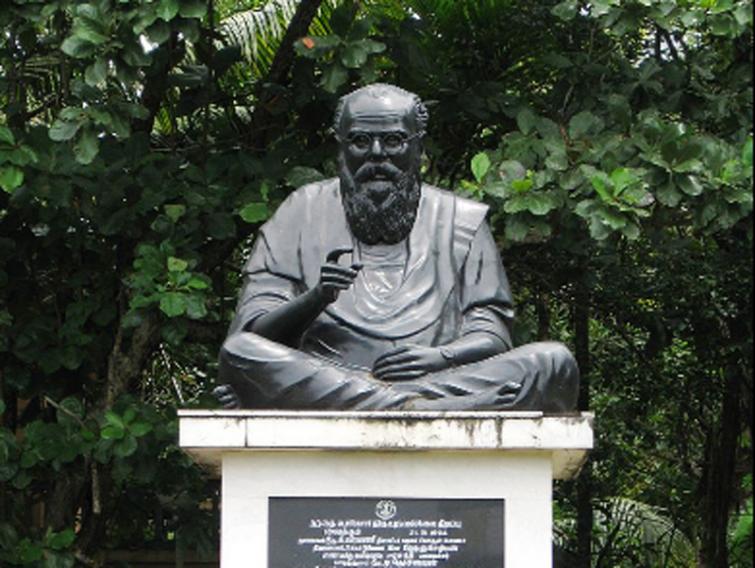 The incident occurred amid the ongoing controversy over southern megastar Rajinikanth's remarks on the Dravidian legend.

People found the right hand of Periyar’s statue broken in the morning and alerted the police, who rushed to the spot and covered the bust with a white cloth, Deccan Herald reported.

Police told the newspaper there were cracks on the head of the statue as well.

Police have launched an investigation into the incident.

It may be noted that Rajinikanth recently said he would neither express regret not tender an apology as what he said was not imaginary and were based on what appeared in the media.

Security at actor Rajinikanth's Poes Garden residence has been enhanced in the wake of protests announced by pro-Dravidar outfits demanding an apology from him for his remarks against Periyar.

According to the veteran actor, in 1971 Periyar E V Ramasamy had led a rally taking out the idols of Lord Ram and Sita without dress and the deities also featured a garland of sandals.

In his address at the 50th anniversary-cum- readers' connect event of Tamil magazine 'Thuglak' on Jan 14 in Chennai, Rajnikanth had said: "In 1971, at Salem, Periyar took out a rally in which undressed images of Lord Sri Ramachandramoorthy and Sita—with a garland of sandal—featured and no news outlet published it."

After a series of protests, Rajinikanth clarified, "I did not say anything out of imagination or something that was not there. Lakshmanan (then Jan Sangh and now BJP leader) who took part in a dharna (in 1971) has corroborated it."

He said it is difficult to forget such incidents, however the same has to be forgotten.