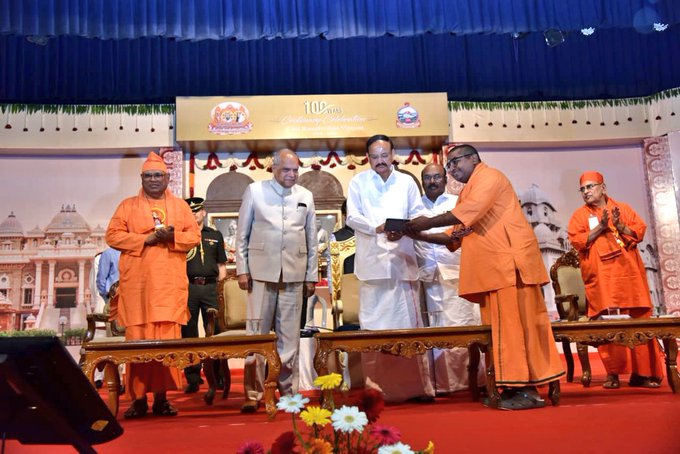 New Delhi/IBNS: Vice President of India M Venkaiah Naidu on Sunday called upon the youth work towards shaping an India that is free of hunger, discrimination and inequalities based on caste, creed and gender.

Speaking at the Centenary Celebrations of ‘Sri Ramakrishna Vijayam,’ Tamil Monthly Magazine brought out by Ramakrishna Mission in Chennai today, he said that there was a renewed interest on India world over as the country was moving to become a 5 trillion dollar economy.

At this juncture, Naidu said that the timeless vision and teachings of Swami Vivakananda would continue to be the guideposts for the individual growth and collective advancement of the nation.

Naidu described Swami Vivekananda as an embodiment of Hindu culture and a social reformer, who was against religious dogmas.

He said that Vivekananda believed in the uplift of humanity, irrespective of caste or creed.

Calling upon the youth to take inspiration from the life and teachings of Swami Vivekanada, he urged them to dedicate their lives for the progress of country, welfare of the downtrodden and uplift of the poor.

“We have opportunities to become strong, stable and more prosperous nation,” he added.

Naidu said that Swami Vivekananda was anguished by the miserable living conditions of the poor and recalled that he prioritized “first bread and then religion.”

Vivekananda also felt that no amount of politics would be of any avail until the masses in India were well educated, well fed, and well cared for.

Talking about the importance of holistic education that takes care of the physical and mental wellbeing of the children, the Vice President said “For Swami Ji education did not mean academic pursuits alone.

He stressed equally on physical fitness and bodily health.”

While expressing his deep concern over the spurt in Non Communicable Diseases, the Vice President cautioned the youth be aware of the ill effects of the changing life style and dietary habits.

He suggested them to practice yoga, meditation and adopt healthy eating habits.

He also asked the youth to take a pledge to be physically fit and promote India’s cultural and spiritual values.

Later, the Vice President visited Amir Mahal, the residence of Prince of Arcot, Nawab Mohammad Abdul Ali and interacted with his family members and other guests at a reception hosted in honour of the Vice President.

Briefly addressing the gathering, Naidu said that India was known for its civilizational values the world over. He urged the people, particularly the younger generation to promote and propagate India’s culture and heritage.

The Vice President said, "We speak different languages but we all are one. The constitution provides equal opportunities to all citizens."