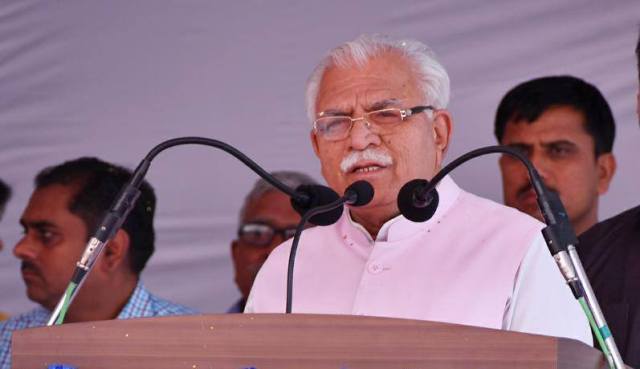 Chandigarh/UNI: Haryana Chief Minister Manohar Lal KIhattar on Sunday condemned the incident of attack and stone-pelting on Sikh devotees at the historic Gurdwara Nankana Sahib in Pakistan and said that protest would be organised, if required, against Pakistan so as to ensure that the minorities residing there were not oppressed in the name of religion and their rights are protected.

Khattar was addressing the gathering after launching the Sampark Abhiyan in support of Citizenship Amendment Act (CAA) in Sector-10 at Panchkula.

He said that the Parliament has recently passed Citizenship Amendment Act to provide citizenship of India to the minorities coming to India from neighboring countries that are being oppressed there in the name of religion. But few opposition parties are misguiding the people of the country by spreading false information without understanding the provisions of the Act. He said that it is being propagated among the Muslims that it is a law to take away the citizenship of the country from the Muslims, whereas in reality, it is to give citizenship. He exhorted the people to remain cautious and do not fall prey to these rumours and consider this Act as in the interest of humanity.

He said that this is not a new Act as it has came into force in the year 1955 as per which minority communities like Hindu, Sikh, Buddhist, Jain, Parsi and Christian who are oppressed in Pakistan, Afghanistan and Bangladesh in the name of religion come to India to lead a respectable life.

Earlier, it was mandatory for them to stay in India for 11 years to get citizenship of India but now Prime Minister, Narendra Modi has implemented a new provision as per which minorities who have come to India before 2014 could be given citizenship of India.

He said that during Atal Bihari Vajpayee’s Government in which Lal Krishna Advani was the Deputy Prime Minister, Dr Manmohan Singh had himself said in the Lok Sabha that such people should be given citizenship as soon as possible. In Haryana, now decks have been cleared for giving them citizenship, he added.

Earlier, the Chief Minister also visited the houses of prominent people in Sector-10 Panchkula as part of Sampark Abhiyan and garner support in favour of CAA.