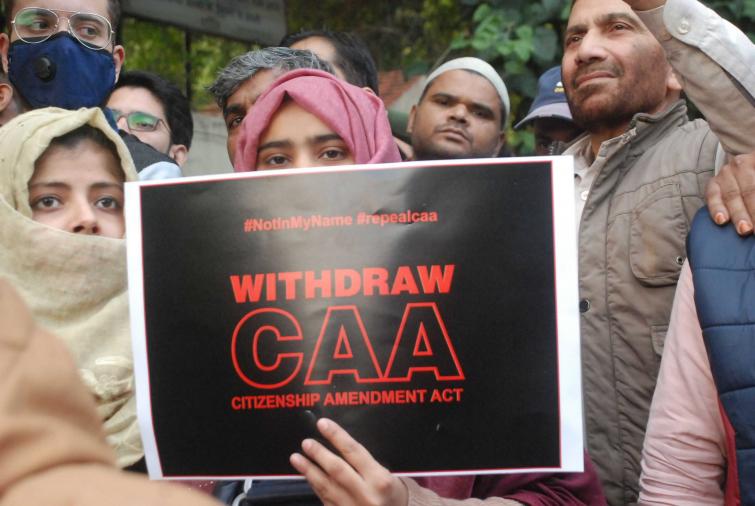 New Delhi/UNI: The United States government, Israel, United Kingdom and a few other countries have advised their citizens to be careful and exercise caution while travelling to the violence-hit north east India.

The newly enacted Citizenship Amendment Act has been strongly resisted in Assam and other northeastern states with violent protests.

The US government has "temporarily suspended" official travels to Assam. An advisory said: "US citizens in the northeastern states of India should exercise caution in light of media reports of protests

and violence in response to the approval of the Citizenship (Amendment) Bill. Government curfews are in place in some areas. Internet and mobile communications may be disrupted. Transport may be

In north east, there is general concern among local population and especially tribals is that the government measure may open up floodgates to illegal immigration.

The US Embassy in New Delhi said in an advisory under title 'Travel Alert for US Citizens: Protests in Northeastern States' also said that the US citizens traveling abroad should regularly monitor the US Department of State’s Bureau of Consular Affairs website.

It also said US citizens traveling to northeastern parts of India should - avoid areas with demonstrations and civil disturbances, Keep a low profile, Monitor local media for updates.

Review personal security plans, Ought to notify friends and family of safety and follow the instructions of local authorities.

Among others, the UK government updated its travel advisory and British nationals have been advised to exercise caution.

"The Foreign and Commonwealth Office (FCO) advises against all but essential travel to the state of Manipur, except the state capital Imphal and the Meiti Valley areas, which include Loktak Lake, Keibul

"You should exercise caution if you’re planning to travel in North East India, monitor local media for the latest information, follow instructions of the local authorities and allow more time for travel.

Over 940,000 British nationals visited India in 2017. Most visits are trouble-free," the foreign travel advise said.

Singapore's Foreign Ministry also said - "Travel conditions are difficult due to street protests and cancellation of some flight and train services".

The Israeli Foreign Ministry has warned against going to north east due to the possibility of the violent protests spreading around.

The government of India has said the new law only provides "expedited consideration for Indian citizenship to persecuted religious minorities already in India from certain contiguous countries".

The new legislation also seeks to address their current difficulties and meet their basic human rights. "Such an initiative should be welcomed, not criticized by those who are genuinely committed to religious freedom," MEA spokesman Raveesh Kumar has said last week after US Commission on International Religious Freedom (USCIRF) had slammed the government of India.

Meanwhile, reports said security has been enhanced at the Bangladesh Assistant High Commission offices in Guwahati and Agartala.