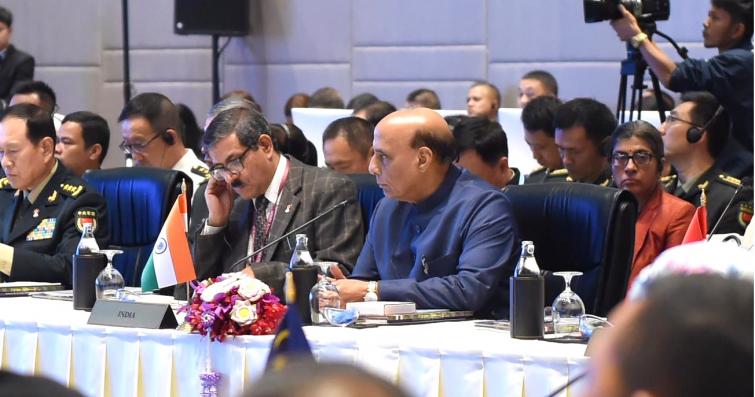 Addressing the 6th ASEAN Defence Ministers’ Meeting Plus (ADMM Plus) in Thailand’s capital Bangkok, Singh described terrorism as the most obvious & heinous of cross-border crimes, adding that some States use terror to pursue political goals making regional security vulnerable.

“It is so much worse when terrorists are aided, abetted, armed, financed and sheltered by States. The interplay between states and non-state actors, used as proxies to foment violence, has worsened this menace. The persistence of State-sponsored terrorism is not just a painful cancer, it is also the leading reason for unsustainable security,” said Rajnath Singh.

He stressed upon the need for a more cooperative, equitable and consultative paradigm to deal with broad & complex security challenges to find sustainable solutions.

Rajnath Singh said, India’s Indo-Pacific vision is based on the idea of sustainable security as it focuses on a free, open, inclusive and rules-based Indo-Pacific; one in which there is respect for sovereignty and territorial integrity of everyone involved.

He added that sustainability implies prioritisation of peaceful resolution of disputes, avoidance of use or threat of use of force and adherence to international laws.

“Our region must remain open and welcoming to the interests of all, those who live in it and others whose interests are in it. In short, our approach to security in the Indo-Pacific is sustainable by definition because it emphasises Security and Growth for All in the Region (SAGAR),” he said.

On the negotiations for a Code of Conduct for the South China Sea, Rajnath Singh hoped that the outcome of these talks will keep with all relevant international laws, including United Nations Convention on the Law of the Sea and promotes freedom of navigation, overflight and lawful commerce.

Emphasising the need to protect the rights of States that are not party to these negotiations, Raksha Mantri expressed hope that the situation will remain stable, without the use or threat of use of force or militarisation of the region.

On the issue of denuclearisation of Korean peninsula, Raksha Mantri said, India looks forward to the progress made through dialogue in addressing all related issues, including the proliferation trail that links South and East Asia.

“As dialogue remains on the table, we hope missile launches and such destabilising activities will cease,” he said.

Rajnath Singh highlighted that India has taken active part in all ADMM Plus mechanisms and contributed to their success.

He also expressed India’s eagerness to co-chair India-Indonesia Expert Working Group on Humanitarian Assistance and Disaster Relief (HADR) in the next cycle.