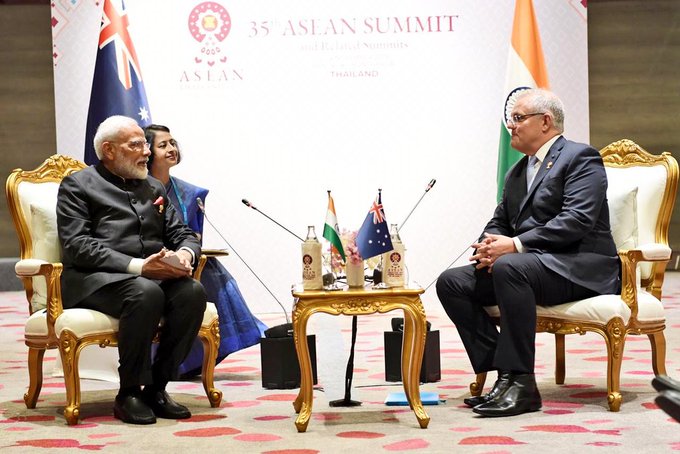 PM @narendramodi had an engaging conversation with Australian PM @ScottMorrisonMP towards deepening & diversifying our relationship. Leaders discussed preparing for a substantive outcome during Australian PM visit to India in January 2020. pic.twitter.com/GQal4c1otX

Meanwhile, the much awaited third Regional Comprehensive Economic Partnership Summit got underway here on Monday.
Prime Minister Narendra Modi and other top leaders and government heads of 15 countries including China, Japan and New Zealand are attending the meet.

All the leaders posed for a group photograph holding each other's hands.

The RCEP deliberations in Bangkok on Monday have assumed significance on the backdrop of global trade tensions particularly due to conflicts between US President Donald Trump and Chinese President Xi Jinping.

A breakthrough in the deal will facilitate creation of the biggest free-trade region in recent times as the 16-nation grouping is home to 3.6 billion people that accounts for nearly half the world's population.

Politically back home, the opposition parties in India have opposed RCEP deal.