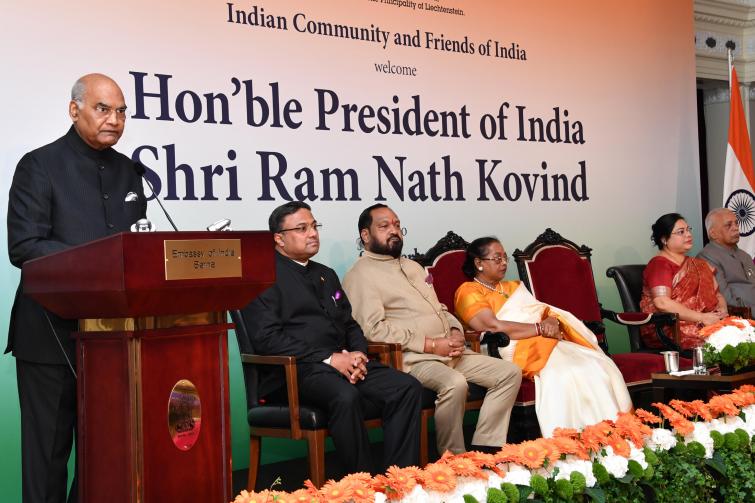 New Delhi, Sept 14 (IBNS): Ram Nath Kovind unveiled a statue of Mahatma Gandhi at Villeneuve, Switzerland on Saturday (September 14, 2019) in the presence of Mayor and President of Canton Vaud and other dignitaries.

Speaking on the occasion, the President said that Mahatma Gandhi’s life teaches us many things.

He built his first hermitage in India on the banks of River Sabarmati. Today, we have brought him to the banks of Lake Geneva. It is a fitting tribute to a man who loved nature and cared so much for it.

His legacy shall inspire us as we work together to tackle climate change and to conserve our ecology.

The President said that Mahatma Gandhi believed in the oneness of humanity.

He embraced all cultures and all peoples. As two democracies with deep respect for diversity, Mahatma Gandhi shall continue to guide us in our shared journey to bring peace and joy for one and all.

Yesterday, the President led the delegation level talks along with President Ueli Maurer of the Swiss Confederation and witnessed the signing and exchange of MOUs/agreements between two countries. He also addressed the India-Switzerland Business Roundtable.

During the delegation-level talks, both sides agreed that terrorism poses a grave challenge to humanity. President Kovind conveyed that India had been a victim of state sponsored terrorism for decades. The Swiss side extended its support to strengthen fight against terrorism in all its manifestations.

President Kovind said that trade and economic relations constitute the essence of India-Switzerland bilateral ties. Switzerland is the largest exporter to India from Europe. Our bilateral trade volume stands at around US$ 19 billion. He said that India is committed to expand its trading ties further.

The President said that India is keen to enhance its skill partnership and learn more from Swiss vocational education system. India is also interested in partnering Switzerland in areas such as Industry 4.0, biotechnology, life sciences, telecommunications, railway infrastructure sector, aviation and renewable energy.

India and Switzerland signed and exchanged agreements/MOUs for cooperation in the field of Climate Change; Letter of Intent to create an India-Switzerland Science and Innovation Alliance; and for renewal of the Hindi Chair at the University of Lausanne.

Speaking at the Business Roundtable, the President said that Switzerland is home to high-end technology and India is producing world class human capital. India ranks as a major global player in areas such as pharmaceuticals, healthcare services, information technology, solar energy, automobiles, space and biotechnology. Our two economies are highly complementary. There is vast scope to combine our relative advantages in capital, technology, science and skills for mutual benefit.

The President said that India has received Swiss participation in its flagship Make in India, Smart Cities, Digital India, Clean India, Start-up India and Skill India programmes. We welcome Swiss companies to further invest and engage in our transformation and our growth.

He said that India has set up an online portal, India Investment Grid, to showcase investment opportunities across India. He called upon Swiss companies to visit it.

Tomorrow (September 15, 2019), the President will leave for Slovenia – the final leg of his state visit to three nations.