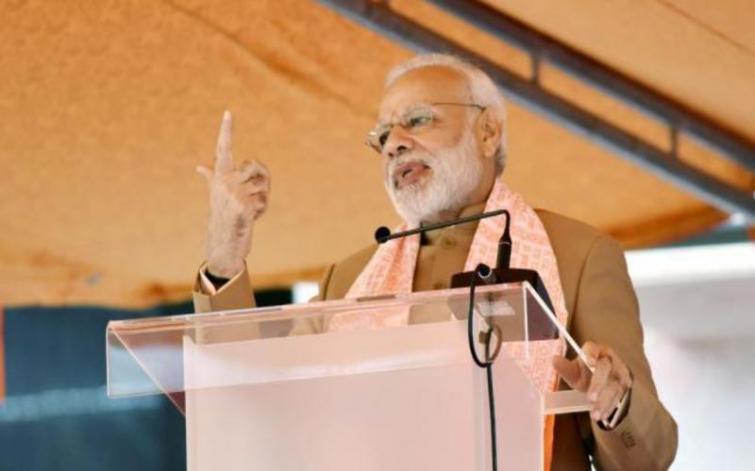 Bahriach, Apr 30 (UNI) Prime Minister Narendra Modi on Tuesday warned the people that menace of terrorism has not been completely wiped out from the country as several terror nurseries were still operating in the neighbouring nation.

"We have to put up a stronger fight to prevent and combat terrorism, though during the past five years of the BJP tenure, there was no terror attack in the religious places or in the markets," he said.

Alleging that the previous SP and BSP governments in Uttar Pradesh, had done nothing on the sleeper cells of the terrorist groups, the PM said these parties were never committed to fighting terrorism either in the past nor will do so in the future.

"These terror groups are scared of Modi and have suspended their operations but if a weak government comes to power then they will have a field day," he warned the people.

Addressing an election meeting here on Tuesday, the PM also hit out at the Congress saying it too had failed to counter terrorism. "Now they (Congress) are saying that they will remove AFPSA after coming to power, which shows that they will weaken the Army to deal with the terrorists," he said.

He said the region is known for the Buddhist and Ramayan circuit, but terrorist always attack places attached to the faith of the people. Hence people should think twice before voting whether they want a strong government to fight against the terrorism or a weak one which will give them space for their activities.

"During our regime, we had never compromised with the security of the country and gave them befitting reply by surgical and air strike. But they are still grouping on the borders and terrorist nursery is going on. You should unite and support a strong government so that their evil motives are not fulfilled," he said.

Modi also hit out at the BSP-SP alliance saying that on May 23, they will again tear apart each other like they did in the past. "This alliance is an opportunistic one for their personnel vested interest but people have rejected them and now a drama would unfold on the day of the poll result," he said.

Elaborating on the works done by his government during the past five years, Mr Modi said house to the poor, toilets, bank accounts, free LPG gas and power connections were some of the welfare schemes implemented by his government. " The Kisan Samman scheme would be expanded to every farmers after we get elected again," he announced.