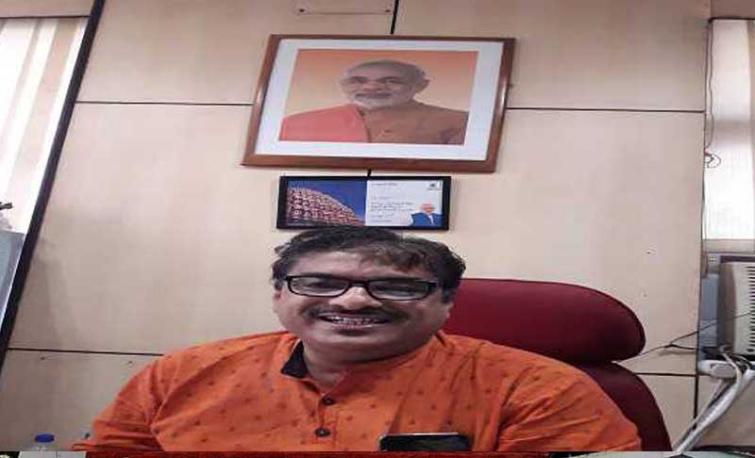 Durgapur (West Bengal), Apr 22 (UNI) The BJP workers in the IT cell and Intellectual unit in this ‘onetime’ industrial town are in much enthusiastic mood.

Most of them are in upbeat mood and hope that the party nominee S S Ahluwalia, the sitting MP from Darjeeling, will sail home comfortably from Bardhaman-Durgapur parliamentary constituency defeating Mamtaz Sanghamita of Trinamool Congress.

“We are banking on good will generated by the performance of Prime Minister Narendra Modi. But there are other factors which can help us to victory,” Durgapur BJP Intellectual unit chief Amitava Banerjee told UNI here.

Elaborating on this he said- “One such reason is intense rebellion in the Trinamool camp. On regular basis Trinamool workers and volunteers are joining BJP. Second major factor is in rural Bengal, the voters know that anti-Trinamool votes should not go to Left. These work in our favour”.

The rebellion in the Trinamool camp, according to sources, has been sparked off by ‘unilateral’ style of functioning of Mamata Banerjee herself .

Senior TMC leader Apurba Mukherjee – when contacted by the visiting UNI journalist- did not conceal his anguish.

“It is irrelevant whether I am upset or not. But when it comes to election matters you must reach out to people like Uttam Mukherjee who has been given the charge of organising and winning elections. Who am I to speak?”

Out of about 5 lakh voters, given the statistics of 2014 – things are overwhelmingly in favour of Trinaool MP Mr Sanghamita, who has been re-nominated again.

“The Trinamool had polled over 36 per cent votes and our share was 21 per cent at number three. The CPI-M did better than us in 2014, but now in rural areas, people are fast realising the futility of voting in favour of Left,” says BJP leader Amitava Banerjee.

The CPI-M leaders do not deny ‘erosion’ in support base but says it is being over estimated.

“The desertion by cadres is over emphasised. There is a conspiracy to suggest that the CPI-M or Left parties are over. But the fact of the matter is, if any party has retained its base braving all hurdles and without money power it is the Left parties,” says Biprendu Chakraborty, CPI-M Durgapur district secretary.

But he admits the competition is becoming complex in Bardhaman-Durgapur parliamentary segment.

“We will prove you wrong. Who knows we will win and media’s favourite Trinamool Congress will end up as number three in our constituency,” he says adding, “Some rebels in Trinamool are determined this time to help either CPI-M or the BJP, so the situation is really bad in the state’s ruling party”.

For all obvious reasons – the BJP camp agrees to such analysis. However, a section of local leaders say – BJP Durgapur unit was keen for a more charishmatic personality as a candidate this time.

“Therefore, we had recommended that if he agrees Modi ji should come and contest. This would have influenced outcome in some other neighbouring constituencies too,” he says.

The refrain by some BJP leaders in Durgapur is they would have preferred even a film personality like Locket Chatterjee.

“Moreover, Ahluwaliaji’s name was announced a bit late. This may be due to any reason. But now that he is here, the contest is serious and we will make it,” says one enthusiastic BJP worker near Palash Dhia.

According to Amitava Banerjee, the BJP is making a sustained campaign and telling voters that only the Modi government at the Centre can take on the ‘syndicate raj and Mafia control games’ in West Bengal.

“Moreover, our message has gone down well when we say the BJP will work for insulating education from money-making brokers. Our fight is also well known against Mamata Banerjee’s plans for Islamisation of education,” he says.

The BJP leader also laments that though Durgapur is known as ‘industrial town’, there is no industry in the locality these days.

“Look at the way they have handled industries. Bengal is power surplus today in the absence of industry and the Chief Minister goes around talking about it as an achievement. She says ‘Egiye Bangla (Bengal making advance),” Mr Banerjee maintains adding “this is funny”.

In this context, he further says “Look at the manner the Chief Minister functions. In the name of populism, she organises Mishti (Sweet) Mela. She does not realise unlike the past, diabetes is now a global concern. A Chief Minister should know how to promote a product and what to promote. Diabetes is almost like epidemic these days. In countries like Japan and Germany, chocolates are being discouraged. But she says we will promote Misthi”.

The diabetes is emerging as a ‘major inheritance disease’ passing onto next generation of children. “There is no study. There is no industrial policy in Bengal. Last Industrial policy we had in this state was under the Left. Today, there is no policy, so how can we have industries here,” he says trying to blunt the opposition campaign against joblessness.

Answering a question, he said deliberately it has been spread that the BJP is a ‘pro-Hindi party’.

“These are part of sinister campaign. A distorted history was promoted and circulated and students of English medium would surprise you while asking about Shyama Prasad Mookerjee – ‘who is this guy’. But over the years, these hurdles and problems have been overcome”.

He also said while the BJP has been always anti-Left ideologically, “It goes without saying that the communists had some principles and ideology”.

“This cannot be spoken about the Trinamool Congress. There is no ideology here. People were fed up with Left and thus they voted for Mamata Banerjee. But the practical change ‘parivartan’ will come in Bengal only under BJP,” Mr Banerjee added.