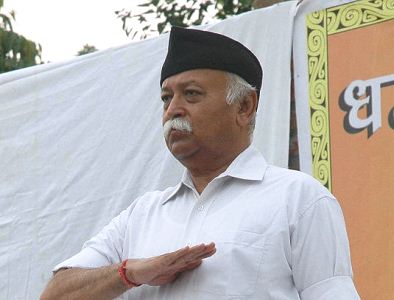 In his address Bhagwat elaborated the vision of RSS that guides its members while praising Prime Minister Narendra Modi on his successful US trip.  Bhagwat also praised India's Mission on Mars and the success of Indian athletes in the Asian Games.   Bhagwat urged all to boycott  Chinese products while also warning people on the Jihadi activities.  He said what we call Hinduness is India's national identity.


He also raised the infiltration issue along the borders of West Bengal and Assam and said some elements in India are also helping these infiltrators.
However, there are apprehensions raised over the first live telecast of RSS chief on Doordarshan.
Historian and social commentator Ramchandra Guha tweeted: "I hope someone files a PIL against DD’s plans to cover the RSS chief's speech live. This naked state majoritarianism must be resisted."
"The RSS is a sectarian Hindu body. Next, imams in mosques and priests in churches may ask that DD covers their speeches live!" he said.
Related Images