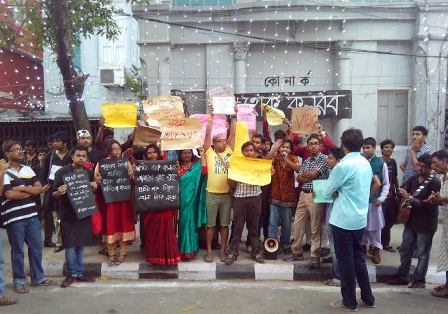 India Blooms News Service | | 02 Oct 2014, 08:43 pm
#JU protest
Kolkata, Oct 2 (IBNS): Students of Jadavpur University who are protesting against the authorities over a molestation and subsequent police high-handedness on the campus took their stir to one of the most happening puja pandals of Kolkata- Maddox Square.

Students with posters and banners hollering the slogan "Hokkolorob" (the social networking page meaning Let There Be Noise that sparked off the students' movement) gathered in South Kolkata's Maddox Square puja pandal- known for its classy environment often- on Thursday afternoon to protest against the recent police crackdown on agitating Jadavpur University (JU) students. A few number of students from other universities and some pandal hoppers also joined with them in that event. Their programme continued till evening. The students said they would continue their protest until the vice-chancellor of JU, Avijit Chakraborty, resigned from his position. At least 35 students of the prestigious Jadavpur University (JU) were arrested at around 2 am on Sept 16 night for staging protests in front of the main administrative building within the campus and the vice chancellor, whom they labelled as a Trinamool Congress man. Students alleged that their members were dragged, manhandled and girls molested by the police officers and those who cracked down on them. They claimed activists from the Trinamool Chhatra Parishad (TMCP), the student's arm of West Bengal’s ruling Trinamool Congress, also came in with the police. The JU students had staged a sit-in demonstration at the main administrative building of the university this month demanding an unbiased probe- with neutral panel sans ruling party members- into the alleged molestation of a second-year student by students from the university some time back. (Reporting by Deepayan Sinha)