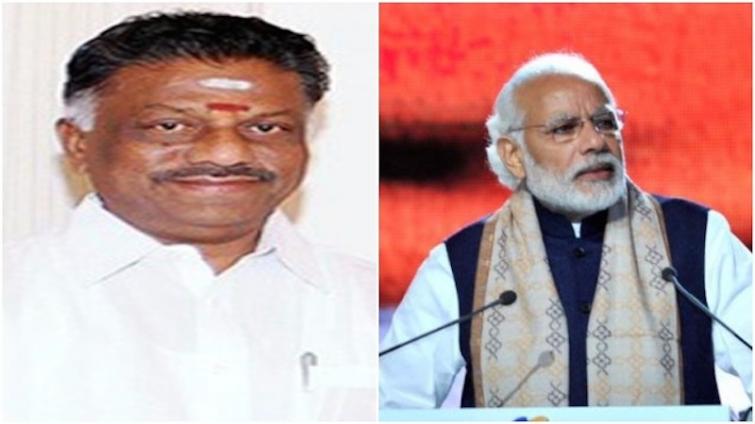 AIADMK-BJP alliance based on Modi's fraternal bond with Jaya: OPS

Chennai, Mar 6 (UNI): Asserting that the AIADMK-BJP alliance was formed based on the fraternal bond Prime Minister Narendra Modi shared with late leader J. Jayalalithaa, Tamil Nadu deputy chief minister O. Panneerselvam on Wednesday said the entire nation wanted Modi to become PM again and that none in the Opposition was qualified to hold the post.

Speaking at a BJP-led NDA election rally in which leaders of alliance partners shared the dais, he said it was Modi has been taking effective steps for the welfare of the nation.

"Hence we are saying, Mr Modi should become the PM again... even the entire country says that," he added.

Stating the BJP-AIADMK alliance was based on the friendship between Modi and Jayalalithaa, he said Modi had personally visited her at her residence soon after becoming Prime Minister.

"Shri Narendra Modiji shared a fraternal bond with the late chief minister Puratchi Thalaivi Amma, who was like an elder sister, to him," Panneerselvam said.

"We have directly seen their friendship and the alliance was formed based on that," he added.

Slamming the Opposition DMK-Congress alliance, Panneerselvam said only their family benefitted during their 10-year rule.

"Neither Tamil Nadu nor the people of the state were benefitted by it," he said and questioned the rationale behind DMK aligning with the Congress after former DMK chief M. Karunanidhi had termed the Grand Old Party an "ungrateful ally" before walking out of the UPA at the height of the Sri Lankan Tamil issue.

He said: "If Tamil Nadu and India has to get the benefits, only Mr Modi should become the Prime Minister and for this purpose we have formed this victorious alliance."

He also took a dig at DMK president M.K. Stalin for criticising the AIADMK-BJP alliance and said he did not have the guts to reiterate his stand on proposing the name of AICC president Rahul Gandhi as the next PM in Kolkata after making a similar announcement at a public meeting in Chennai.

He also asked the Opposition whether it was ready to name who their Prime Minister would be.

"No one in the Opposition is qualified to become PM and it has no guts to name one," he said.