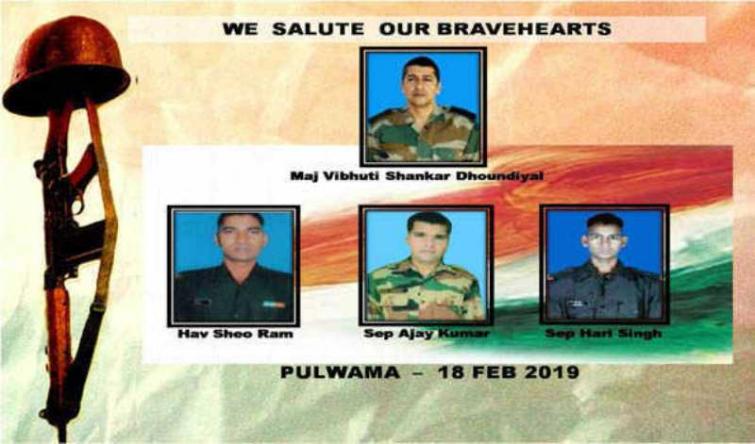 Srinagar, Feb 18 (UNI/IBNS): Five security force personnel, including an Army Major and three top militants of Jaish-e-Mohammad (JeM) were among nine persons, killed in about 18-hour-long fierce encounter, which ensued during a Cordon and Search Operation (CASO) in south Kashmir district of Pulwama, in the wee hours of Monday, official sources said.

According to Deputy Inspector General (DIG), South Kashmir Range Amit Kumar, a Lt Col and two Army personnel were injured in fresh firing by a militant, who was also later killed on Monday evening.

Meanwhile, mobile internet service, which was resumed last night in the valley after remaining suspended during the day, has been blocked in Pulwama, where clashes have also erupted.

The encounter ensued three days after 44 CRPF personnel were martyred in a fidayeen attack at Awantipora on Srinagar-Jammu national highway in Pulwama district, on Thursday.

Sources said that on a tip-off about the presence of militants in Pinglena village, about three km from main town in Pulwama on Srinagar-Shopian road, troops of 55 Rashtriya Rifles (RR), Special Operation Group (SOG) of Jammu and Kashmir police and CRPF launched a joint search operation.

However, when the security forces were sealing a particular area in the village at 0100 hrs, militants hiding there opened indiscriminate firing, in which four soldiers, including a Major, were critically wounded.

The injured were shifted to 92 Base hospital, where they reportedly succumbed. The deceased were identified as Major D S Dondial, soldiers Seva Ram, Ajay Kumar and Hari Singh.

Two militants of JeM, including a commander involved in recent fidayeen attack on CRPF convoy in Pulwama on Thursday, were also killed. The operation was going on, when the reports last came in.

The slain militants were identified as Kamran and Hilal Ahmed. While Pakistan national Kamran was responsible for recruiting, radicalising and training militants in Kashmir Valley, Hilal was a local Kashmiri bomb specialist.

Sources said as the security forces were conducting searches in the area, there was fresh firing by a third militant hiding in the damaged house, in which DIG Amit was hit by a bullet in the foot. A Lt Colonel and two other soldiers were injured.

A Head Constable of Jammu and Kashmir police Abdul Rashid, bodyguard of Kumar, who was also hit by a bullet, later died in the hospital. The third militant was killed, they said.

Though firing has stopped, security forces are searching the area. Police has appealed to people not to enter the encounter site, which could prove dangerous.

Meanwhile, a civilian Mushtaq Ahmad, who was also hit by a bullet near the encounter site, has also succumbed.

Residents in the nearby houses have been shifted to safer places.

Security forces had been deployed in sensitive places, including the main town, to prevent demonstrations. However, demonstrators clashed with the security forces at several places.

Tthe vehicle used by the terrorists was a Mahindra Scorpio and it carried more than 350 kg of explosives.