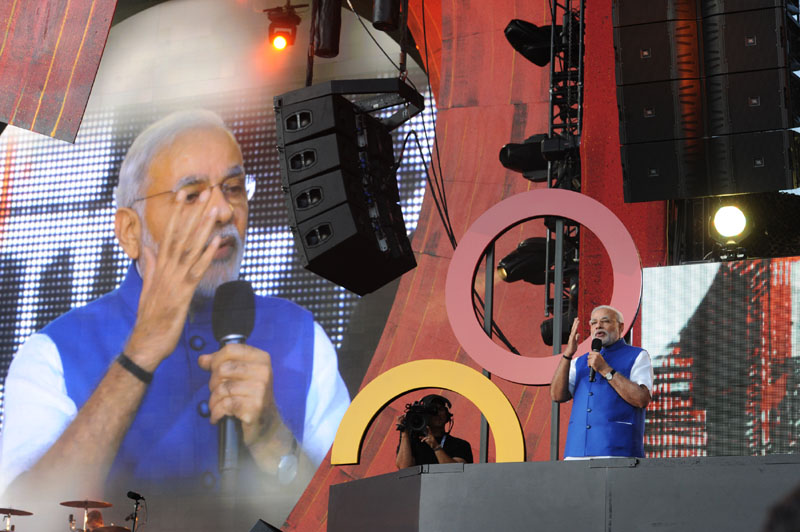 The iconic Madison Square Garden which is a popular venue for staging rock concerts and sports events, tasted a mega event of a different kind as huge number of Indians were seen chanting 'Modi Modi' as they gave the newly elected Indian Prime Minister a rock-star welcome here.

Speaking to the NRIs and others assembled at the venue, he said: " We want to make development a mass movement ."

In a speech which lasted for an hour, Modi said with large population of the country being the youths, India will  progress very fast.

"There is no reason to be disappointed. India will progress very fast and the skills of our youth will take India ahead," he said.

Modi also pitched his  'Make in India'  campaign and invited all to be a part of this effort.

" I request you all to look at MyGov. Please visit the website and see how you can get involved ," he said.

He said 'good governance' is essential for the progress of any nation.

He said he is working hard to remove 'outdated laws' operating in India.

"If I can remove one outdated law from the country then I will be happy," he said.

Modi, who came to power at the Centre in May, said: " I am aware that you all have several expectations from India. Even the people of India are expecting a lot from the Government.We will be successful is fulfilling the aspirations of the people."

"Winning elections is not about any post or chair. It is a responsibility. Since taking over, I haven't even taken a 15 min vacation," he said.

Connecting with the NRI's, he said: "You may not have voted in 2014 but am sure when results were coming, you didn't sleep & celebrated. A lot of you came during the campaign. I couldn't thank you then but I thank you today."

Modi also kept on highlighting the campaigns his government has undertaken since coming to power in the Centre in May after clinching a huge victory in the  Lok Sabha polls and uprooting the  Congress-led UPA government which ruled the nation since 2004.

Mentioning his tea-seller back ground, Modi said: "I am a small man so I always feel like helping the small people of the nation in a big way."

Modi, who won the elections from the holi Indian city of Varanasi, urged Indians and NRIs to help in cleaning Ganga river.

"Cleaning Ganga is not only for religious reasons but it is also crucial in tackling the climatic problems," Modi said.

"Mahatma Gandhi never compromised on cleanliness. He gave us freedom. We should give him a Clean India," Modi said.

The country is all set to witness a grand launching of Swachh Bharat Mission by  Modi on Oct 2 , the birth anniversary of India's 'Father of the Nation' Mahatma Gandhi.

He urged NRIs to try and create a change in India.

He said he could realise the troubles faced by the NRIs even as he stayed miles away from them.

He announced several new moves which will help Indians staying abroad and said: "PIO card holders- they have lot of visa issues. We decided they will get lifelong visas.Those who stay in India for long have to go to police stations too. They won't have to do that now."

The cheering crowd shouted 'Modi Modi' once again as he announced that: "In some time we will merge PIO and OCI schemes and make it one.A new scheme will be in place soon."

Modi had addressed the UN general Assembly on Saturday.