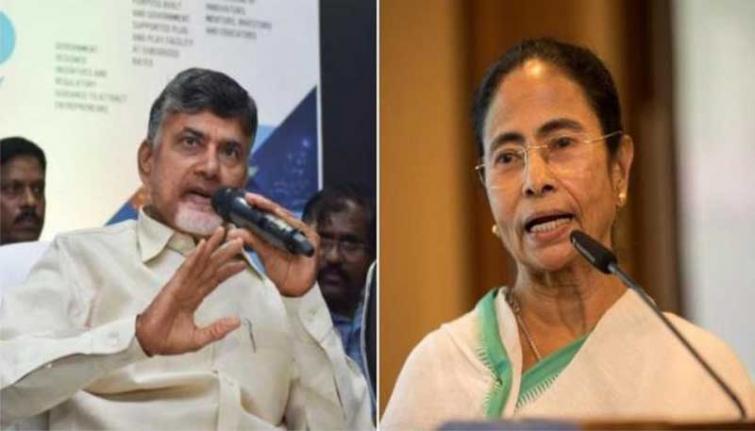 Kolkata, Feb 5 (IBNS) : Andhra Pradesh Chief Minister Chandrababu Naidu will meet Mamata Banerjee  in Kolkata on Tuesday as a slugfest goes on between the West Bengal Government and the Centre over the CBI attempt to interrogate Kolkata police commissioner Rajeev Kumar, which spawned into a rare kind of political controversy.

The West Bengal Chief Minister has been  on a 'save the constitution' dharna since Sunday night, after CBI officers turned up at the Kolkata Police chief's residence to question him in connection with the Saradha scam probe.The Kolkata police not only resisted CBI officers, but also physically removed them from the spot to keep under detention for sometime. The matter is now being looked into by the Supreme Court following a petition by the CBI.

As Banerjee receives support from most of the non-BJP forces, which have been on a mission to stitch up a front against the Bharatiya Janata Party ahead of the Lok Sabha elections, Naidu Naidu will be the third big opposition leader, after DMK's Kanimozhi and Lalu Yadav's son Tejashwi, to meet the Bengal Chief Minister over the clash with CBI.

"The BJP is blaming others for corruption. However, the party and its president Amit Shah are most corrupt in India, Mr Naidu told news agency ANI, and it is under "their rule that leaders like Nirav Modi and Mehul Choksi escaped after looting the banks of our country,"  Naidu, who is also chief of the Telugu Desam Party,  alleged.

On Monday,  lashing out at the Centre and the BJP, Naidu  accused the Narendra Modi government of misusing the CBI against opposition leaders. "Everyone should condemn the incidents in West Bengal. These revengeful actions against Ms Mamata Banerjee are because her unity rally in Kolkata was successful," Naidu had said.