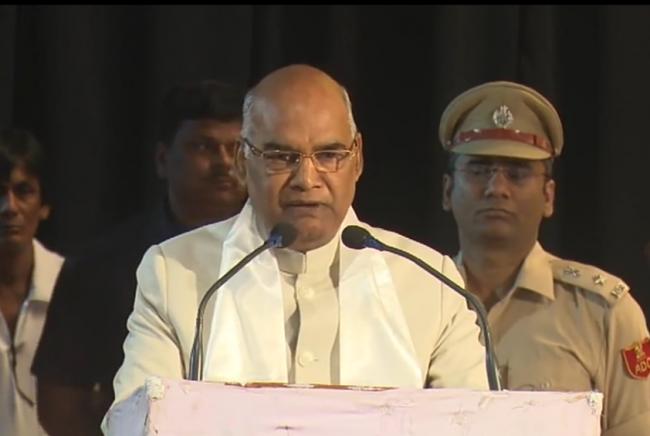 New Delhi, Jan 31 (IBNS): President Ram Nath Kovind today said the target of the Union government from day 1 has been to improve the lives of the citizens through good and transparent governance and make sure sure the benefit of public services reached the lowest strata of the society.

"The targets of my government were determined by countless and helpless faces such as - that poor mother who cooked in a smoke filled kitchen; that helpless sister who was compelled to postpone her own treatment due to financial worries despite serious illness; that daughter who had to wait the whole day until the cover of darkness for going to the toilet; that child who was compelled to wait for day light to study because there was no electricity; that farmer who was caught in the anxiety of repaying his loan while watching his crops damaged by hail storm; that youth who was unable to earn his livelihood because no bank would lend to him," the President said in his address to the joint sitting of the two Houses of Parliament.

"In the last four and a half years, my government has infused new hope and confidence among the people of the country, enhanced the country’s image and has effectively brought in social and economic change. As a result, my Government has been able to win immeasurable affection and trust of the people," he said.

Talking about building homes for every citizen on India, President Kovind said: "The government has also fast-tracked the construction of houses across cities and villages under the Pradhan Mantri Awas Yojana, in an unprecedented manner."

Comparing the current government with the previous one, he said: "In the last four-and-a-half years, 1 crore and 30 lakh homes have been constructed under the rural housing schemes of the Government, whereas in the five years preceding 2014, only 25 lakh houses had been constructed."

"My Government is working hard towards realization of the dreams and aspirations of all the sections. By decreasing the burden of income tax and keeping rate of inflation under control, Government has created new opportunities for expanding the savings of the middle class," he said.

Criticising the previous UPA government ahead of the general elections that are scheduled to take place in a few months where Prime Minister Narendra Modi will be looking to return to power for a second term, the President said: "When the nation was fortunate to have a visionary and compassionate Prime Minister in Atal Bihari Vajpayee, who also understood the pain of the poor; several new Departments and Ministries were created and new programmes were launched. A separate Ministry for the North East, a Ministry for welfare of the Tribals, Sarva Shiksha Abhiyan and connecting the nation through Golden Quadrilateral were singular contributions of Atalji. He undertook a grand initiative to eliminate the widespread disparities prevailing in the country. The programmes and Ministries conceived by Atalji played a vital role in eliminating the social imbalances during the initial years of 21st Century. But unfortunately these initiatives did not get the desired momentum and continuity in subsequent years."

The President also mentioned the contentious citizenship amendment and triple talaq bills that the govt will look to pass in the current session.

"The Citizenship Amendment Bill will help in the securing of Indian citizenship by those victims who were persecuted and were compelled to seek refuge in India. These people cannot be blamed since they were victims of circumstances," said Kovind. "My Government has made a provision for capital punishment in case of heinous crimes like rape of minors. In many States, capital punishment has been awarded after expeditiously completing the hearing which has sent out a strong message to persons with such perverted thinking."

"With a view to liberate our Muslim daughters from a life of fear andanxiety and to provide them with equal right to lead their lives at par with other daughters, my Government is striving hard to get the Triple Talaq Bill passed by the Parliament," he said and also mentioned the "historic" 103rd Amendment to the Constitution "to extend the benefit of reservation to the poor belonging to the general category".

The President also spoke of the government's vision and journey towards a "New India".

"— A New India, where every person has access to basic amenities.

"— A New India, where every person is healthy, secure and educated

"— A New India, where every person gets an opportunity to nurture his or her talent, and has equal opportunities of advancement.

"— A New India, where every child progresses in life without any deprivation, and every daughter feels safe.

"— A New India, where every person gets justice with dignity.

"— A New India, which commands the respect of the entire world."