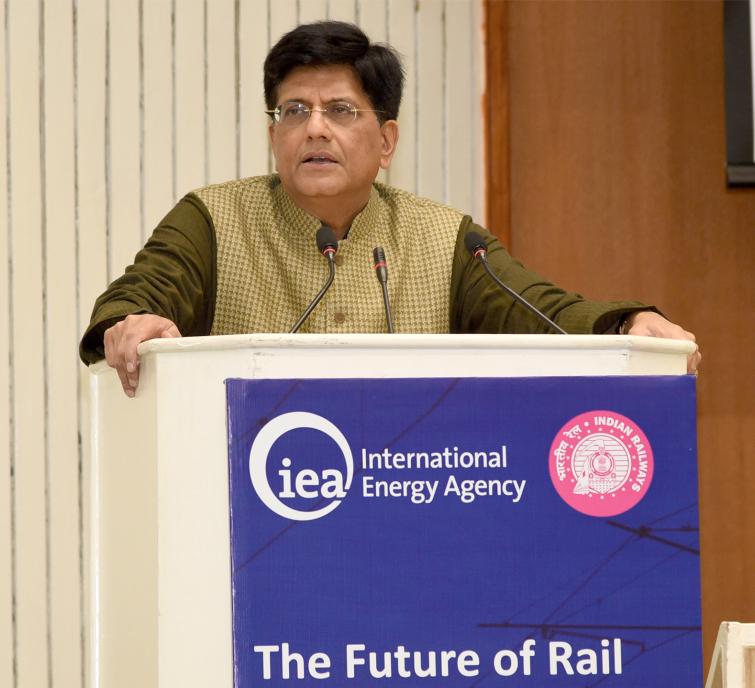 Speaking on the occasion, Piyush Goyal said, on Wednesday is the death anniversary of Mahatma Gandhi and Railways played a very important role in the his life, and his journey from Mohan to Mahatma was captured in a tableau during the Republic Day Parade this year.

He added that, what Mahatma Gandhi Ji said is still relevant for the entire world.

One of his writings quotes: "The Day the Power of Love overrules the Love of Power, the World will know Peace" continues to guide us even today.

He said that this Government led by Prime Minister Narendra Modi is committed to providing a better future for the country's youth by combatting climate change and bringing down our emission levels.

The huge investment Railways has achieved in the last 5 years has helped us improve safety, complete long-delayed projects and introduce modern & unprecedented technology in services.

Goyal further said that the indigenously produced Vande Bharat Express is an engineering marvel that will change our approach to train manufacturing as well as revolutionise train travel in India.

He also highlighted Indian Railway’s successful effort to convert diesel locomotives to electric locomotives as truly innovative and added that it will be a game-changer in the way forward as we move towards 100% electrification for the Indian Railways.

He informed that 5 years ago, Railways had electrified about 600 km of tracks across the country. Last year alone, we electrified over 4,000 km, and in the coming year we aim to electrify over 6,000 Km.

He reiterated that there is a rising demand for better quality, safer, more comfortable, efficient, reliable and cheap transport and added that no other form of transport can provide this other than railways.

In his introductory remarks, Chairman, Railway Board, Vinod Kumar Yadav said that Railways can play an important role in the sustainable development of the world economy.

He added that rail transport is superior to any other form of transport in terms of energy efficiency and being environment friendly.

He highlighted the focus on capacity augmentation and infrastructural development by Indian Railways in recent years to make it an engine of growth for the nation.

“The Future of Rail” the first-of-a-kind report analyses the current and future importance of rail around the world through the perspective of its energy and environmental implications.

The report reviews the impact of existing plans and regulations on the future of rail, and explores the key policies that could help to realise an enhanced future rail.

This first ever global report has a focus on India, elaborating on the unique social and economic role of rail in India, together with its great enduring potential, to show how India can extend and update its networks to harness rail at a scope and scale that is unparalleled.