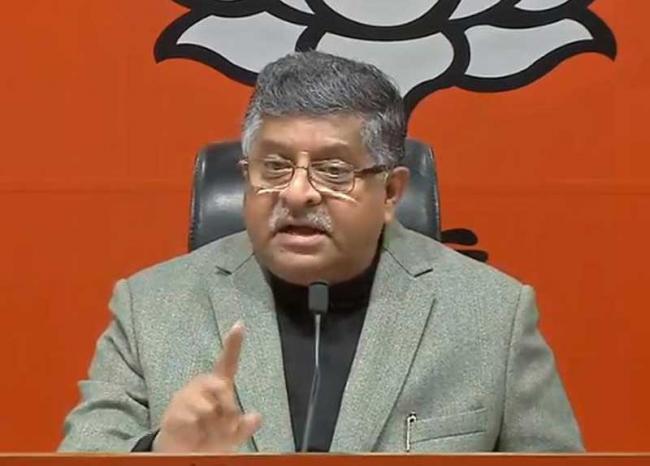 New Delhi, Jan 22 (IBNS): The Bharatiya Janata Party (BJP) on Tuesday questioned the presence of Congress leader Kapil Sibal in the EVM hackathon event held in London and alleged that it was organized by the grand old party of the country.

At the news conference in London, Syed Shuja, a US-based cyber expert who claims he was a part of the team which designed the EVMs used in India, said the 2014 general elections in India were rigged.

Union Law Minister Ravi Shankar Prasad questioned the presence of the Congress leader in the event and said in a press conference: "In what capacity was Kapil Sibal present at the EVM hackathon event? Is the Congress-sponsored event designed to defame the popular mandate of India?."

"The Congress party has already started finding a reason to state for the defeat in the 2019 Lok Sabha polls," he said.

Kapil Sibal to come up with new news channel ahead of Lok Sabha polls:

Amid controversy over the London event, reports have emerged that a new news channel will be launched by Sibal soon.

Sibal will be one of its promoters.

The channel has been named Harvest TV and the English news channel is expected to go on air on Jan 26.

It is owned by Veecon Media that already has licences for English, Hindi and other regional language channels. A Hindi channel will follow the English news channel, as per reports, reported The Print.


Barkha Dutt, a consultant for the channel, will anchor a prime show and so will Karan Thapar. Other prominent TV anchors such as Seemi Pasha (ex-India Today) and Vineet Malhotra (ex-Times Now) are also expected to be a part of the channel, the news portal said.

When asked to confirm his role, Thapar told ThePrint to “please speak to Harvest TV about it”. Dutt refused to comment.

Insiders at Harvest TV told ThePrint that launch preparations are on in full swing. “The promos are being shot now and will be on air before the launch,” said a source in the channel.

“Our channel’s promise is that we’re a platform ‘Where Truth Matters’. The channel will ask the right questions, be fair and not editorialise while offering news,” Deepak Choudhry, who is helping with the expansion of Veecon Media & Broadcasting told ThePrint. “We seek to provide space for an alternative narrative while avoiding unnecessary jingoism.”

The Election Commission of India has denied allegations by an "expert" - in a news conference in London - that the electronic voting machines (EVMs) used in Indian elections can be tampered with.

"The ECI firmly stands by the empirical facts about foolproof nature of ECI EVMs deployed in elections in India," the commission said.

"It needs to be reiterated that these EVMs are manufactured in Bharat Electronics Limited (BEL) and Electronics Corporation of India Limited (ECIL) under very strict supervisory and security conditions and there are rigorous Standard Operating Procedures meticulously observed at all stages under the supervision of a Committee of eminent technical experts constituted way back in 2010," it added.