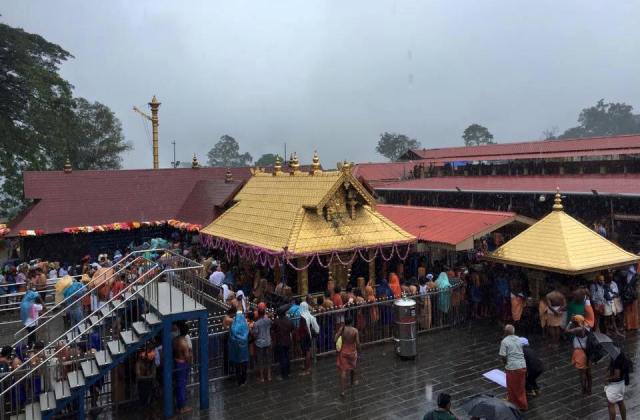 Pamba, Dec 23 (IBNS): Eleven women under 50 years of age on Sunday is awaiting entry to the Sabarimala Temple in Kerala amid massive protests.

The women gathered at the Pamba base camp since dawn.

Initially, six women, who began their journey by road from Madurai, were escorted by police teams at Pamba.

They arrived at Pamba base camp, which is 4 km from away from the shrine to Lord Ayyappa, around 3:30 am.

Later they were joined by five others, who assembled there is a show of solidarity.

Meanwhile, protests have also intensified against these women's entry to the shrine.

However, these women have told the police that they will not return without offering prayers at the temple, located in the Western Ghats.

The women are part of a 50-member group from several states including Tamil Nadu, Kerala, West Bengal and Odisha who will attempt to enter the shrine together.

Several groups of women separately had tried to enter the temple at various time after the Supreme Court in its ruling broke the age-old norm.

Even four transwomen had also tried to enter the shrine on Dec 18.

As per reports, a total of thirty women under the age of 50 will attempt to enter Sabarimala temple on Sunday.

On September 28, a five-judge bench of the Supreme Court had lifted the ban on women's entry into the Sabarimala temple declaring the relevant rules as unconstitutional.

Following the top court's verdict, the shrine opened on October 18 for the first time allowing menstruating women, belonging to the age group of 10 to 50, to enter the temple.

However, several men and women had protested outside the temple, and tried to prevent the entry of women in the shrine.

Reports said the state's Left government says it intends to implement the apex court's order but the Congress and BJP were creating problems.

For centuries, menstruating women had been banned from entering the temple.