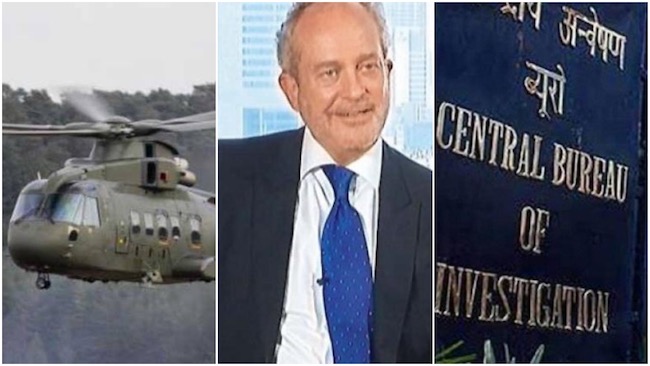 AgustaWestland middleman to be produced in court; Modi says now troubles for Namdaars

New Delhi/Jaipur, Dec 5 : Christian Michel, the alleged middleman in the Rs 3,600-crore AgustaWestland chopper deal, will be produced in court on Wednesday after he was extradited to India from Dubai late Tuesday night, media reports said.

According to reports, Michel, on his arrival in India, was taken to the CBI headquarters for questioning.

Michel’s extradition comes six years after his alleged involvement in the purchase of VVIP helicopters first surfaced in 2012.

It was alleged that he had entered into a criminal conspiracy with co-accused persons, which included the then IAF chief SP Tyagi and his family members, and government officials had abused their official positions by reducing the service ceiling of the VVIPs helicopter from 6,000 metres to 4,500 metres, at the time when the Manmohan Singh-led UPA government was in power.

The extradition operation code-named ‘Unicorn’, the CBI says, was carried out under the ‘guidance’ of National Security Advisor Ajit Doval and being coordinated by interim agency Director M Nageswar Rao.

Training his gun at the Congress, Prime Minister Narendra Modi said with Michel now in the CBI possession, beans will be spilled revealing names of those who were behind the alleged scam.

"We brought back the middleman Rajdaar (Chritian Michel) of Naamdaars (Gandhi's) from Dubai. Now even we don't know what deep troubles his statements are going to cause to Naamdaars," he thundered while addressing an election rally at Sumerpur in Rajasthan.

That day, Emirati lawyer Abdul Moneim Bin Suwaidan of Bin Suwaidan Firm for Advocates and Legal Counsels, representing Michel, submitted documents showing that courts in Switzerland and Italy had ruled on not to extradite his client, reported Khaleej Times.

Last year, James was arrested in the UAE.

The extradition proceedings are going on since then.

The British middleman was wanted in India for allegedly organising bribes in exchange for a contract for VVIP helicopters.

An Italian court investigated the contract because Agusta's parent company is Finmeccanica, an Italian defence manufacturer, and decided that vast amounts of bribes were routed to India by company executives to land the deal for 12 VVIP helicopters for about Rs. 3,600 crore.

The deal was cancelled by India in 2014 after the Italians began investigating it.

In 2016,  former Air Force Chief SP Tyagi was arrested in connection with the VVIP chopper deal scam. He was the first ever military chief of the nation who was arrested.