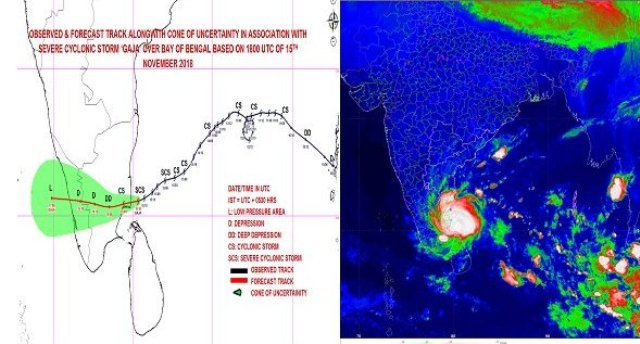 Chennai, Nov 16 (IBNS): Cyclone Gaja made a landfall in Tamil Nau on Friday.

Over 76,000 people have been evacuated from the area.

The wind speed gushed upto 120 kmph as the cyclone hit the state.

A MET department tweeted few hours ago had said: "The Severe Cyclonic Storm ‘GAJA’ over Southwest Bay of Bengal and lay centred at 2330 hrs IST of 15th November, 2018 about 55 km east-southeast of Nagapattinam (Tamil Nadu) and 50 km east-northeast of Vedaranniyam (Tamil Nadu)."

As the cyclone made a landfall, heavy rains lashed areas like Nagapattinam, Tiruvarur, and Thanjavur, uprooting trees in several regions.

Keeping an eye on the landfall of the cyclone, power supply was disconnected in Nagapattinam and in several other coastal regions of the state.

Four teams each from the National Disaster Relief Force and its counterpart in the state are currently operating in the area.

Four trains have been cancelled by the Southern Railway.

School and colleges are scheduled to remain shut on Friday.