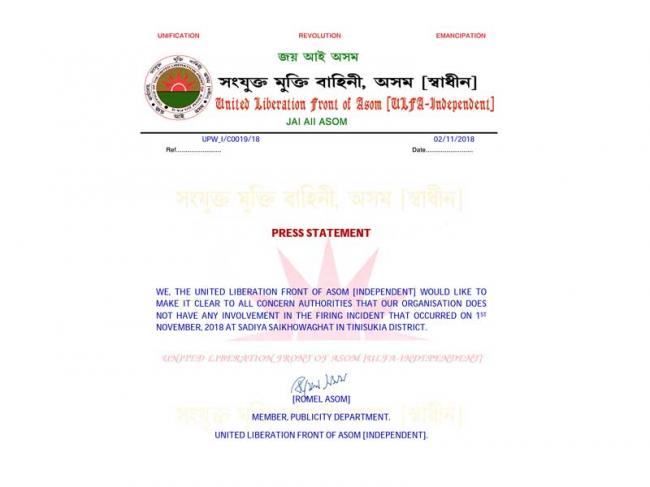 Guwahati, Nov 2 (IBNS) : A day after killing of five people by unidentified gunmen at in the  Kherabari area in upper Assam’s Tinsukia district,  security forces launched massive operation along Assam-Arunachal Pradesh border to track down the culprits even as the ULF denied its involvement in the incident.

A top official of Assam police said besides launching the combing operation, the  Assam police is in touch with their counterparts in Arunachal Pradesh.

Assam ministers Keshab Mahanta, Parimal Suklyabaidya and Tapan Kumar Gogoi have rushed the area and met the family members of the victims.

Meanwhile,  banned outfit ULFA (I) on Friday denied their involvement into the incident.

A press release signed by Romel Asom, Member of Publicity Depratment of ULFA (I) and  sent to the Assam media houses said, “We, the United Liberation Front of Asom (Independent) would like to make it clear to all concerned  authorities that our organisation does not have any involvement in the firing incident that occurred on 1st November, 2018 at Sadiya Saikhowaghat in Tinsukia district.”

The five victims belonged to the Bengali community.

“Miscreants  attacked the innocent people following prevocative  remarks over the NRC and Citizenship bill made by some individual and some organisations,” the Assam state BJP president said.

He demanded the arrest of those who made provocative statements.

On the other hand, Assam Pradesh Congress on Friday staged a massive protest in Guwahati over the Tinsukia killing incident.

The Congress workers shouted against the BJP-led Assam government for its alleged failure to maintain law and order situation  and demanded  appropriate measures against such incidents.

The party also  demanded a CBI inquiry into the incident.

Former Assam Chief Minister and senior Congress leader Tarun Gogoi hit back at the state Government, saying that the administration has totally failed to protect the common people in the state.