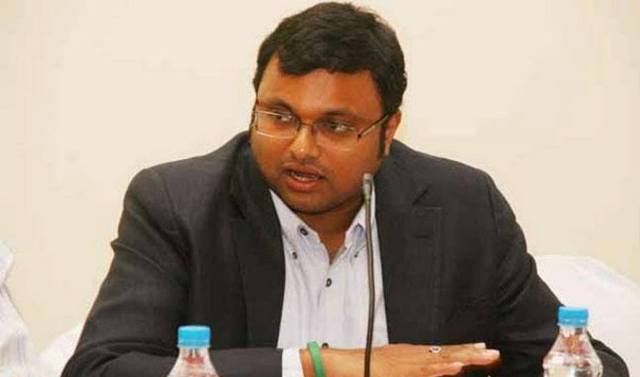 Karti's lawyer had requested the top court for an urgent hearing.

The lawyer said Karti has a plan to travel to Italy, Austria and the UK on Nov 3 and he needed the court's permission.

Every time Karti has to travel abroad, he will have to take the apex court's permission.

Refusing to hear the request, Chief Justice of India Ranjan Gogoi said as he has been quoted by NDTV, "People come and go abroad. What's our concern."

Karti is an accused in an alleged Aircel-Maxis scam case. The CBI had said two illegal payments were given to Karti's firms, Chess Management and Advantage Strategic, during the Aircel-Maxis deal.

The CBI has alleged that Maxis had paid Rs. 3,200 cr to take over Aircel while then Union FM Chidambaram had powers to clear only Rs. 600 cr.

However, in the file, it was shown that only Rs. 180 cr was cleared.

On Oct 25, Karti along with his father P Chidambaram have been named in a chargesheet filed by the Enforcement Directorate (ED) in Rs 3,500-crore Aircel-Maxis case.

Earlier in July, the Central Bureau of Investigation (CBI) had filed a chargesheet against the father-son duo.