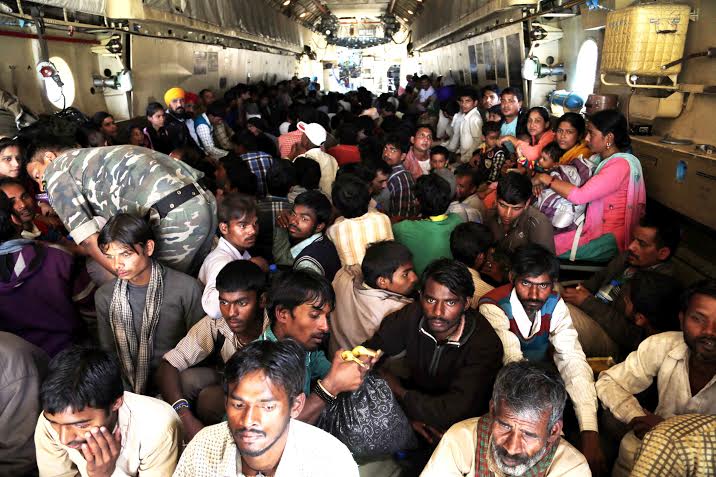 Over 1.4 lakh people rescued in flood-hit Jammu and Kashmir

India Blooms News Service | | 13 Sep 2014, 01:28 pm
# flood hit Jammu and Kashmir, # Ministry of Defence
New Delhi, Sep 13 (IBNS): Over 1,42,000 persons have been rescued so far by the armed forces and National Disaster Relief Force (NDRF) from different parts of Jammu and Kashmir in the ongoing rescue and relief operations in the flood-ravaged State.

As many as 86 Indian Air Force (IAF)’s transport aircraft and helicopters are carrying out the rescue operation. The army has deployed around 30,000 troops for rescue and relief operations, in which 21,000 troops are deployed in Srinagar region and 9,000 troops in Jammu region, a press communiqué released by the Ministry of Defence (MoD) said.

Armed forces personnel are distributing water bottles and food packets on a large scale. So far more than 4,00,000 litres of water, 1,31,500 food packets and over 800 tonnes cooked food have been airdropped and distributed in the flood-affected belts.

So far, 1771 sorties were undertaken by the helicopters and aircraft and 2371 tonnes of relief materials have been air-dropped by the IAF.

8,200 blankets and 1119 tents were provided to the flood victims. At least 80 medical teams of the Armed Forces Medical Services (AFMS) are already operating in full swing in flood-hit areas of the state.

A total of 224 boats of the Indian army and 148 NDRF’s inflatable boats are actively involved in the rescue operation. Altogether 19 relief camps were established by the armed forces in Srinagar and Jammu region, sources said.