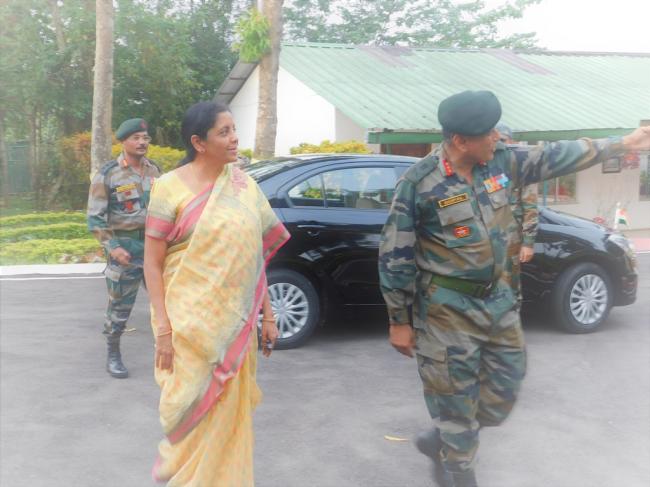 Guwahati, May 29 (IBNS): Union Defence Minister Nirmala Sitharaman on Tuesday arrived at Dimapur while on her maiden visit to the Army’s Spear Corps Zone in Nagaland.

At Dimapur, the Union Defence Minister was briefed by Lieutenant General Gopal R, AVSM, SM, General Officer Commanding Spear Corps on the progress of operations of the Corps which include counter terrorist as well as border management operations on the Indo-Myanmar Border in the North East States.

On May 30, Nirmala Sitharaman will depart for forward areas of Nagaland along the Indo-Myanmar Border.

Kohima based Defence PRO Colonel Chiranjeet Konwer said that, the Defence Minister will undertake a detailed assessment of the Border Guarding operations undertaken by Spear Corps and interact with officers and troops of the Assam Rifles operating along the border so as to make a first hand assessment of the security situation there.

During this visit to the forward areas, the Defence Minister will also meet and interact with the local people at these locations.

After having visited the forward areas, Nirmala Sitharaman will revert to Delhi in the evening on the same day.