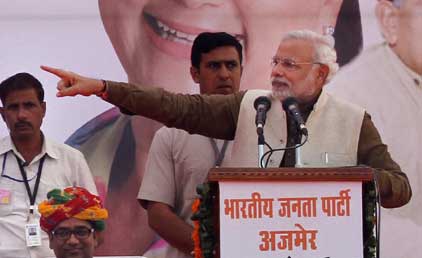 Modi for more co-operation in clean energy with Germany

During the meeting, Foreign Minister Steinmeier conveyed Germany’s strong desire to work together with the new Government in India to further expand and deepen bilateral relations.

He welcomed India’s decision to accept the invitation of Chancellor Angela Merkel for India to participate in Hannover Messe 2015 as a partner country.

The Prime Minister recalled his fruitful telephone conversation with Chancellor Merkel on July 17 while transiting through Germany.

He expressed appreciation for Chancellor Merkel’s personal interest and commitment to India-Germany relationship.

Modi said that India looked forward to the visit of Chancellor Merkel for the next round of Inter-Governmental Consultations in 2015.

The Prime Minister lauded Germany’s remarkable economic resurgence over the past decade.

He described India and Germany, which are bound by democratic values, as “made for each other” because of complementary skills and resources to power the next generation of industrial development through partnering in manufacturing and infrastructure development.

The Prime Minister also suggested that using Germany’s strength and experience in the area of skill development; both sides develop a concrete time-bound plan for training of Indian youth to meet Indian needs and the global requirement of skilled human resources.

He also called for taking forward the ongoing cooperation in the area of clean energy and forging new partnerships in the areas of solid waste management, waste water treatment and cleaning of rivers.

It was agreed that both sides will undertake preparations with the aim of finalizing concrete roadmap for cooperation in each of these areas at the next Inter-Governmental Consultations meeting.

Towards this end, issue specific workshops will be organized ahead of the Hannover Messe 2015.