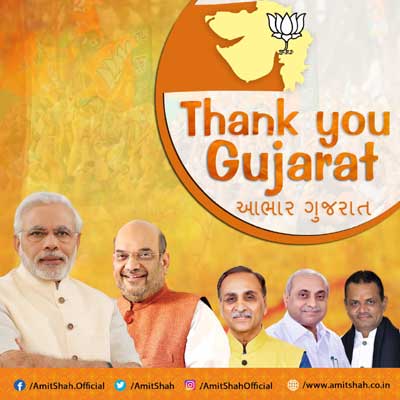 New Delhi, Dec 18 (IBNS): With BJP poised to comfortably romp home in Gujarat and Himachal Pradesh, party president Amit Shah arrived at the party headquarters in New Delhi on Monday on a jubilant mood, according to media reports.

An elated Narendra Modi tweeted, "Election results in Gujarat and Himachal Pradesh indicate a strong support for politics of good governance and development. I salute the hardworking BJP Karyakartas in these states for their hardwork which has led to these impressive victories."

He followed it up with another tweet that said, "I bow to the people of Gujarat and Himachal Pradesh for their affection and trust in BJP. I assure them that we will leave no stone unturned in furthering the development journey of these states and serve the people tirelessly."

Earlier he had tweeted in Hindi, where he said "Vikas wins, Gujarat wins."

Shah also congratulated the people of Himachal Pradesh for expressing their faith in BJP and PM Modi.