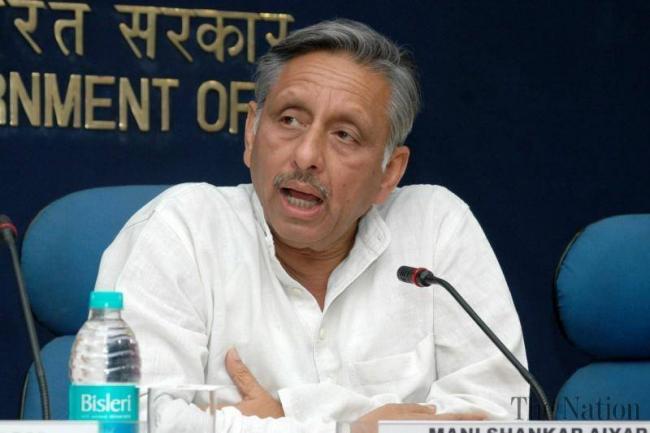 Speaking to media, Aiyar said: "My mother tongue is not Hindi and I do not use any filthy words. I did not mean low born when I used the word "neech aadmi". However, if my language has caused damage to the Congress party in Gujarat, I apologise, I apologise for using a word which can be interpreted into some other meaning."

Aiyar, who had once called Prime Minister Narendra Modi a "chaiwala" or "tea-seller", on Thursday attacked the PM calling him "neech aadmi" or "low person" after the latter took a jibe at Congress Vice President Rahul Gandhi at the inauguration of the Dr. Ambedkar International Centre.

Disapproving Aiyar's comment, Rahul tweeted: "BJP and PM routinely use filthy language to attack the Congress party. The Congress has a different culture and heritage. I do not appreciate the tone and language used by Mr Mani Shankar Aiyer to address the PM. Both the Congress and I expect him to apologise for what he said."

Aiyar's comment came after the Prime Minister took a swipe at Rahul during the inauguration of the Dr. Ambedkar International Centre by calling the Congress' would be President a Shiva devotee.

Modi said some parties were seen to talk more about Baba Bhole (Lord Shiva) than Babasaheb.

Reacting to Modi's jibe at Rahul, Aiyar told media: "Modi is a very cheap type of a person, he has no manners and always has a tendency to play petty politics."

Both Modi and the Bharatiya Janata Party (BJP) were quick to respond to Aiyar's comment.

In a series of tweets, Modi has tried to snub Aiyar's comment. In one of his first tweets, the PM said: "I have nothing to say on a ‘wise’ Congress leader calling me ’Neech'. This is the Congress mindset. They have their language and we have our work. People will answer them through the ballot box."

"They can call me 'Neech'- Yes, I am from the poor section of society and will spend every moment of my life to work for the poor, Dalits, Tribals and OBC communities. They can keep their language we will do our work."

"I beg to the people of India- please let them be. Let them keep calling me 'Neech' we will not respond. In our hearts we do not have this mindset and want to congratulate them for theirs. If anything- we will answer them for their mindset by our votes on 9th and 14th" Modi tweeted later.

Union minister Ravi Shankar Prasad, on behalf of the ruling BJP, held a press conference to attack the Congress over Aiyar's comment. Prasad said  the comment reflects the "feudalistic and arrogant thinking" of the Congress party.

"It is the feudal, arrogant thinking that only they (Congress) can rule India and no one else," the Union minister said.

Prasad believes the comments from the Congress party "are a part of a design to demean our PM because he is born of a poor family. It is an insult to poor people of India and Gujarat."

He also said Aiyar's comment had full approval of Congress' would be President Rahul Gandhi.