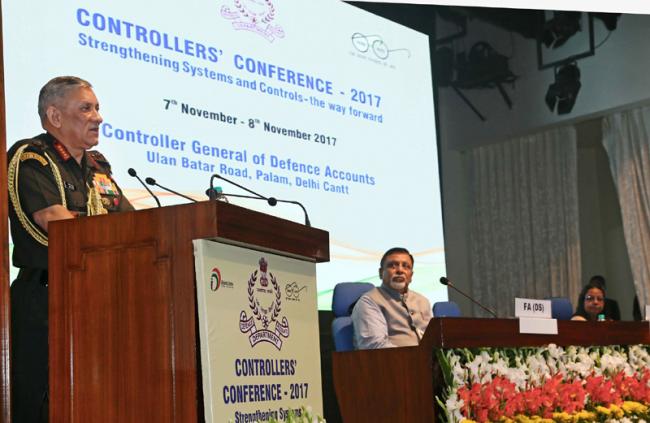 Inaugurating the conference, Chief of Army Staff lauded the initiatives of Defence Accounts Department like defence travel system, E-PPOs, National compilation system and its benefits to the Indian Army.

He complimented the department for its efforts of automation which helped in transparency and effective functions, expertise in accounts, audit and finance matters. The need of uniformity in disbursement by various agencies was stressed upon.

He also highlighted the importance of fraud detection and prevention as an integral internal control mechanism and thanked the department for all its efforts in strengthening the same.

The theme of the conference is ‘Strengthening Systems and Controls: the Way Forward’.

The conference will have five business sessions such as transforming audit through implementation of online audit - CICP, IMMOLS, ILMS by leveraging Big Data, transformation of payment functions, challenges in the implementation of the Integrated Financial Advisor System in defence, strategy for effective human resource management and  image building by achieving zero grievance in pension through CPDS and implementation of DTS.

Controller General of Defence Accounts (CGDA) Veena Prasad set the tone for the conference by urging all the participating officers to deliberate, debate and deliver solutions which have a mutual bearing on the Services and Defence Accounts department.

He advised the officers of Defence Accounts Department to work with passion and in a mission mode to reduce lead time.

According to the Ministry of Defence, the conference would focus on issues of using analytics for better decision making, challenges in implementation of the Integrated Financial Advisor system, change management in core functions of Defence Accounts Department and better stakeholder management in handling defence pension issues.

The conference is expected to facilitate exchange of knowledge and experience and initiate fresh ideas which could contribute towards aiding fiscal management of our Armed forces, the Defence Ministry release said.

The conference is being attended by senior officials from Ministry of Defence, Defence Account Department and Services Headquarters.