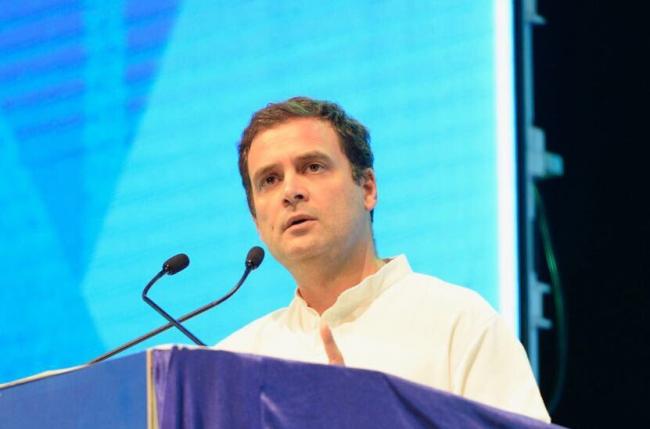 Bharuch, Gujarat, Nov 1 (IBNS) : Slamming the BJP-led Government at the Centre for its policies, Congress Vice President Rahul Gandhi on Wednesday said the Goods and Services Tax is robbing the poor people of their hard-earned money and the country is "weeping" over Narendra Modi's mistakes.

Addressing a rally in Bharuch district in the  third phase of his campaign, Gandhi also challenged Modi's statement that doing business in India has become much easier, claiming that the experience of small traders is just the opposite.

He said "there  is undercurrent of dissatisfaction and unhappiness" over the BJP’s policies of GST and demonetisation across the country and Gujarat.

"The GDP dropped by 2 percent  but they didn’t stop there. We warned them to implement the GST carefully. We told them the rate shouldn’t exceed 18 percent  and that there shouldn’t be five slabs," he said.

"We sent our leaders...told Arun Jaitley that it’s not a case of BJP vs Congress, it’s about the people.... I have renamed it to Gabbar Singh tax...Poor people toil and their money is snatched from them."

The Congress Vice President alleged that small time  businessmen, who don't have accountants, have to file three  forms every months. "They come to me and tell me, "Rahul ji I can't understand the rates...I sell miscellaneous items.””

"And now they want to celebrate on 8 November. The country is weeping over PM Modi’s mistakes but the Government is not ready to accept this," Gandhi said.

He also wanted to know from the PM where is the black money Modi had promised to unearth.

Gandhi, who is in Gujarat for two days, will be attending various meetings and rallies in Bharuch and Surat.

Gujarat will go to polls in two phases, on 9 and 14 December.