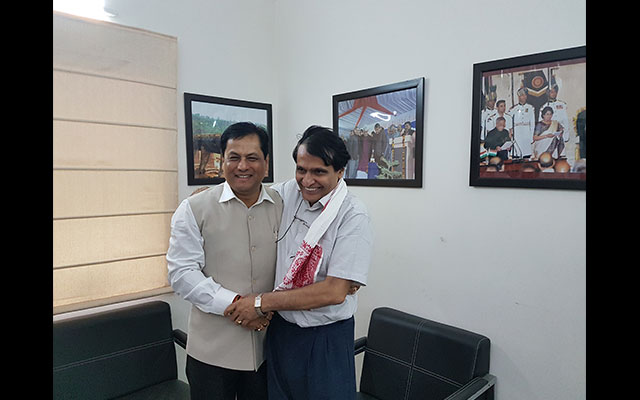 Sonowal informed him that release of the amount against 141 schemes would further help in speedy implementation of all ongoing and proposed flood and erosion management projects in the State.

Sonowal also sought Union Finance Minister’s help in the revival of paper mills of Assam under Hindustan Paper Corporation as he drew Jaitley’s attention of the role played by these industrial units for the industrial development of both Brahmaputra and Barak valley.

Sonowal informed Jaitley that closure of these units have had a cascading affect on the bamboo industry and the entrepreneurs associated with the industry.

Seeking the Union Minister’s immediate intervention for a revival package of Rs. 1800 crore, he said that resumption of these units would augur well in employment generation as well as industrial development in Assam.

As a part of his series of efforts for expediting the development of Assam, Sarbananda Sonowal also called on Union Minister for Commerce and Industry Suresh Prabhakar Prabhu at the latter’s Akbar Road Residence in the national capital and sought his ministry’s help for the promotion of bamboo and agro-based industries in Assam.

The meeting which lasted for nearly 45 minutes, focussed on the state’s potential in organic industry.

Sonowal said, “Be it the world famous tea, horticulture or other cash crops like ginger, Assam always holds the key in organic sector”.

Sonowal pleaded Prabhu to pump in more resources for value addition to agricultural and horticultural products in the State.

He also asked help from the Union Minister to infuse dynamism in Toklai Tea Research Centre at Jorhat.

Acknowledging the huge potential of Assam, Prabhu informed Sonowal that his ministry would organise a National Seminar in Assam to focus the inherent strengths of the State at the national arena.

Sonowal also requested Prabhu for introducing a suitable and flexible industrial policy in line with the earlier North East Industrial and Investment Promotion Policy for Assam.

He also sought Prabhu’s help in getting an Industrial Policy to incentivise investment before the upcoming Global Investment Summit to be held in February in which Prime Minister Narendra Modi has consented to inaugurate.