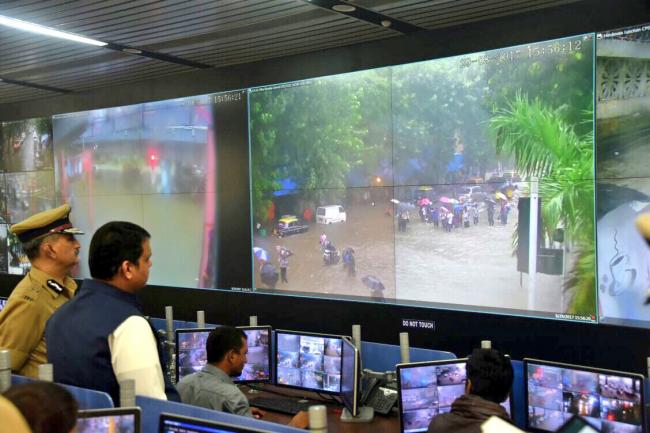 India Blooms News Service | | 29 Aug 2017, 11:34 pm
#MumbaiRains, #MumbaiSinks, #MumbaiFlooded, #ContinousDownpour, #LifeOutOfGear
Mumbai, Aug 29 (IBNS): It seems like there is no respite for Mumbaikars as the weather department has sounded a "red alert" for heavy rains in Mumbai on Wednesday, even as the city already witnessed continuous downpour for the past three days.

Normal life was crippled in the city which received nearly 300 mm of rain in some parts on Tuesday.

Railway and traffic movement in the city has been badly hit as a result.

The Mumbai Police advised people to leave their cars if the water reached the level of the tyres, media reported.

Schools and colleges will remain closed on Wednesday in the wake of incessant rains.

Prime Minister Narendra Modi  has also urged people of Mumbai and its surrounding areas to stay safe as heavy rains dislodged and disrupted normal lives in the financial capital of India on Tuesday.

The high-tide around 4.50pm has worsened the situation and people have been advised by the MDMA  to seek higher areas if necessary, media reports said.

With what is being described as a "typhoon like situation," the met office has predicted that the situation will remain grim at least for the next 48 years with a high tide likely to hit by the evening.

According to reports, the rainfall recorded by the automatic weather stations between August 27 at 8 am and August 28 at 8 am was 102 mm.

Between 8.30 am to 2.30 pm Monday, the regional Meteorological Centre, Colaba recorded 35.8 mm and the one at Santacruz recorded 28.6 mm of rain.

The reports said the rains have  affected the movement of local trains, the lifeline of the city and its suburbs.

The local train services on the Western Railway are also operating with a delay of 10 minutes due to heavy rainfall.

Road traffic has either been disrupted or diverted in several areas as a result of the downpour, causing owes to the commuters.

Several trains have also been cancelled while multiple flights are being delayed.

Predicting that the next 48 hours of the rains would continue to spell a bad period, the met office has advised people not to leave their homes unless absolutely necessary.

Mumbai had witnessed unprecedented rainfall on July 26, 2005. The city was paralysed due to floods and normal life disrupted .